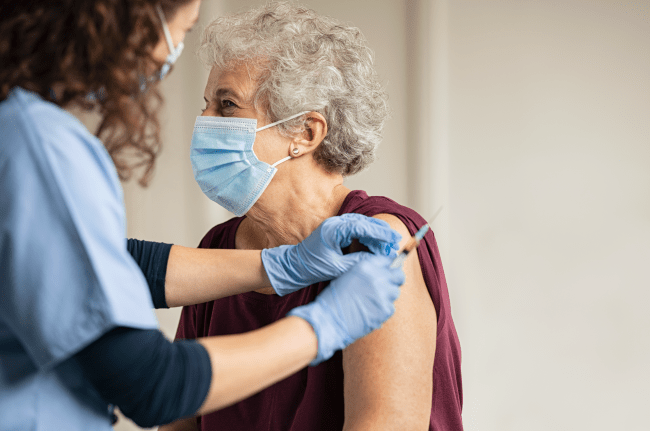 You know that scene in The Day After Tomorrow (underrated flick, great for a snow day, watch it under a cozy blanket with someone you don’t mind sharing kneespace with), where Jake Gyllenhaal leaves the library to get medical supplies off the ship for the girl he likes? And the wolves show up? But they can’t really get their footing and slide around due to all the ice?

To get her coronavirus vaccination last weekend, Frances H. Goldman, 90, went to an extraordinary length: six miles. On foot.

It was too snowy to drive at 8 a.m. on Sunday when Ms. Goldman took out her hiking poles, dusted off her snow boots and started out from her home in the Seattle neighborhood of View Ridge. She made her way to the Burke-Gilman Trail on the edge of the city, where she wended her way alongside a set of old railroad tracks, heading south. Then she traversed the residential streets of Laurelhurst to reach the Seattle Children’s Hospital.

It was a quiet walk, Ms. Goldman said. People were scarce. She caught glimpses of Lake Washington through falling snow. It would have been more difficult, she said, had she not gotten a bad hip replaced last year.

At the hospital, about three miles and an hour from home, she got the jab. Then she bundled up again and walked back the way she had come.

Awesome. This lady is trekking three miles into town to get her vaccine because enough is enough. If you have the opportunity to take yourself out of the Coronavirus sweepstakes, you take it. Doesn’t matter if there are miles of snow-covered streets in your way, or wolves; go get the vaccine. Frances Goldman wants to meet her great-grandchild. And now, thanks to the vaccine, she might even get to meet her great-great-grandchild. Seriously, I think this woman lives until she’s 115.

The appointment went smoothly, she said. And it carried a special significance for Ms. Goldman because she could recall the joy of national celebrations in 1955, when another important vaccine was developed.

“I can remember back to when the polio vaccine was rolled out,” Ms. Goldman said.

That vaccine rollout “was done in a very organized manner,”…

This time around, Ms. Goldman has been disappointed by the vaccine distribution. “There’s no excuse for it being done the way it was,” she said. “It was unorganized. Completely unorganized.”

She’s old enough to be able to compare the administration of the COVID and polio vaccines. And guess what? Polio wins by a MILE. How sad is that? In 1955, the country was able to administer the polio vaccine like they were handing out line tickets at the deli counter. Meanwhile, back in 2021, we’ve got hundreds, maybe thousands, maybe TENS of thousands of defrosted vaccines being thrown out when people just blow off their appointments. Shifting timelines of availability, delayed shipments to states… it’s a mess.

I’ll tell you what though: if Frances Goldman can walk six miles in her snow boots for the vaccine, I’ll happily sift through a dumpster outside an urgent care facility, jabbing myself with whatever syringes I can find. It’s a numbers game. Eventually, one of them will have to be the vaccine. Right?