Aaron Eckhart Reflects On ‘The Dark Knight’, Marvels How It’s Still A “Reflection Of Our Times” 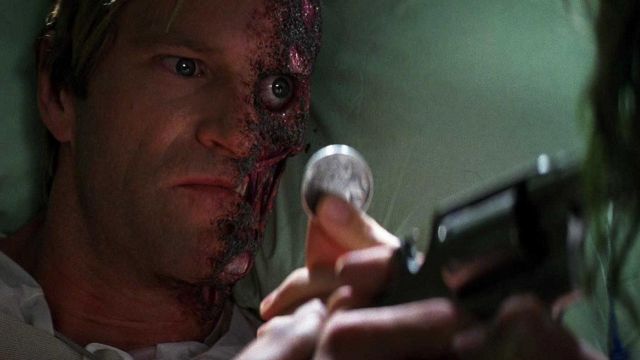 I actually remember exactly where I was the first time I saw The Dark Knight in the Summer of 2008: it was at the Beach Stadium 5 theater in Long Beach Island, New Jersey. The reason I remember — other than The Dark Knight turning out to be one of the defining movie experiences of my lifetime — is that I actually lost my family’s tickets right before the show.

The Dark Knight was released in July, which is usually when my mother, father, sister, and I would spend a couple of weeks at the Jersey Shore. It was one of those classics Jersey Summer stormy days, providing the perfect opportunity for me to guilt the rest of my family into a trip to the movie theater. We had time to kill, though, so in between purchasing the tickets and the beginning of the film, we did some shopping at the local markets, providing the perfect opportunity for my 15-year-old self to lose track of the four tickets we just purchased. Needless to say, my parents were none too happy as I was the one who dragged them to the theater in the first place.

That was 12-years-ago — I’m now a 27-year-old man, and yet, every time I toss on The Dark Knight (which is essentially monthly), I’m amazed at how contemporary the film still feels. Go back and watch 2008’s Hellboy II: The Golden Army or Punisher: War Zone or even The Incredible Hulk and let me know if you feel the same way.

Aaron Eckhart, who starred in that decade-defining film as Harvey Dent (and eventually Two-Face), also finds himself in awe of The Dark Knight, as he recently told The Hollywood Reporter that its a ” special, special movie”.

Some scripts are whatever; you get through them and hey, fine. But The Dark Knight was a novel and it was thick. It was like reading literature. And there’s something about Gotham City too. You have a city that’s oppressed and being run by a criminal gang. People can’t go out during the day, everybody’s scared for their safety, and the people that are paid to protect them are corrupted. They’re part of the gang and nobody can trust anybody. Sound like anything that’s familiar?

And then people are looking to a superhero for their liberty and their freedom. Not only is it a great story and a great movie, but this is what cinema and art are all about. It’s a reflection of our times. Chris knocked it out of the park and that’s why that movie is so important. And then, obviously, the performance of Heath. What a special, special movie. I was happy to be a part of it. [via THR]

If you find yourself fixin’ for a Dark Knight rewatch, it’s currently streaming over on HBO Max. We’ve also done a full retrospective podcast of The Dark Knight over on The Post-Credit Podcast, so make sure to check that out if you want more deep-dive analysis of the greatest comic book movie ever made