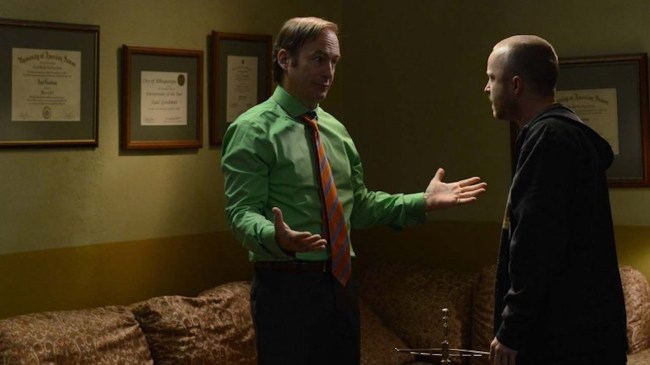 Now that El Camino: A Breaking Bad Movie has been released and the blue meth dust has settled, the focal point of the Breaking Bad universe once again becomes its epic prequel series Better Call Saul.

Already on the air for four seasons, Better Call Saul has developed into such a legitimately excellent show that there are corners of the internet that wonder whether or not it’s as good, if not *better than*, Breaking Bad.

Now, while you’ll never catch me spewing such blasphemy — Breaking Bad is easily the greatest television show of all-time — I will gladly admit that Better Call Saul is certainly one of the best shows currently on television.

Perhaps most impressive is the fact that Better Call Saul has become one of the greatest series currently on air without having to use the ploy of Breaking Bad stars Bryan Cranston and Aaron Paul to pump up interest.

But while Better Call Saul has yet to go to the Jesse Pinkman and Walter White well just yet, it doesn’t mean they never will, as Breaking Bad and El Camino star Aaron Paul has expressed that he’s more than ready and willing to appear on the Jimmy McGill-centric prequel if called upon by series creator Vince Gilligan.

“If Vince asked me to jump onto Saul, I would do it in a heartbeat. And I would know it’s for very good reasons,” Paul told EW.

“Obviously, we would love to give that to the fans of Breaking Bad and the fans of Better Call Saul, but we don’t want fans to kind of scratch their head and they’re like, ‘Well, why did that happen?’” [Entertainment Weekly]

At this point, I’ll invest in anything that’s set in the Breaking Bad cinematic universe. A show about Marie Schrader opening a mineral store in honor of her late husband? I’m in. Walter Jr. competing on a breakfast edition of Top Chef? Sold.