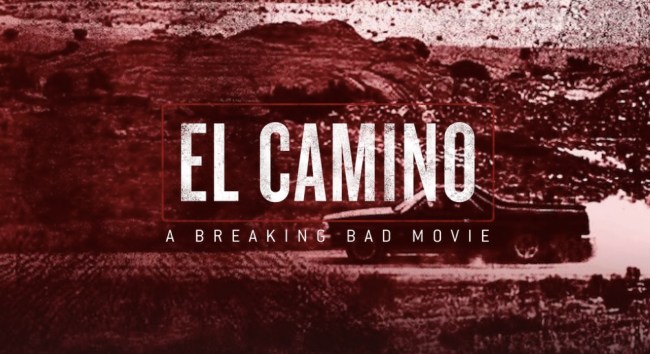 Despite watching Breaking Bad through beginning to end about four times in my life — with the most recent of those rewatches coming this past summer — being tossed back into its universe so abruptly, which is now almost blindingly well-produced, was jarring.

Warning: spoilers for El Camino: A Breaking Bad Movie will follow. If you would like a SPOILER FREE review, you can find that here.

Opening with an existential scene about right and wrong between Jesse and Mike, Breaking Bad drops you right into the center of its untold history without any forewarning.

Whether it’s to hint what’s to come or to throw the audience into an immediate state of nostalgia, Pinkman’s riverside chat with Mike cuts brilliantly to Jesse’s freedom-tasting battle cry, which is quite literally mere seconds after we saw him last in the Breaking Bad finale. A massive contrast to the sun-drenched riverside where he once smoked a cigarette and pondered the future with Mike, it’s overtly noticeable how dark Jesse’s world now is.

Luckily, writer and director Vince Gilligan understands and handles this by immediately adding the much-needed comic relief of the southwestern meth-smoking Batman and Robin, Badger and Skinny Pete. As if permanently stuck in time, Badger and Skinny Pete remain unchanged — their spaced-out stoner one-liners still land as cleanly as they always did.

And in typical Breaking Bad fashion, not only do Badger and Skinny deliver on their comedic duties, but they subvert audience expectations, as Skinny Pete’s final actions and ultimate farewell to his best friend Jesse provide one of the film’s most heart-tugging moments.

Following Jesse’s brief yet touching reunion with his old partners in crime, El Camino kicks into overdrive, as it begins to track Jesse’s journey to freedom by using his past experiences to explain how he’ll do it.

Ironically, while the film is a race-against-the-clock, it’s most gripping moments come in the form of flashbacks, whether they are tending to the chores of the sociopathic Todd or chowing down on hashbrowns with Walter White following a weekend-long desert cook. Gilligan takes our compassion for Jesse Pinkman and manipulates it masterfully, as its the moments from the original Breaking Bad timeline that serves as the film’s most emotional.

Yet, while the flashbacks prove to be one of El Camino‘s strongest aspects, they do contain perhaps my only complaint about the film (a complaint which I’m not even sure I’m fully complaining about yet, I just found it odd): and that’s the blatant display of Todd’s sociopathy.

Jesse’s captivity situation didn’t need to be any further illustrated as we already understood its severity and Todd’s inhuman lack of empathy wasn’t something that needed explaining after we’ve already seen him murder a child and an innocent mother. So, why Gilligan decided to lean into Todd’s sadistically murderous tendencies, I don’t know. It’s certainly not that the subplot bogged down the film, it just felt superfluous to flesh out Todd’s already fleshed-out homicidal personality (seriously, did you notice the Drew Sharp reference with the tarantula?).

Still, Gilligan shrewdly turns this brief detour into Todd’s sociopathy as a way to explain Jesse’s means of escape, which ultimately, provides sufficient means to an end. Similarly, that deviation into Jesse and Todd’s past did provide one of the film’s most extraordinary shots — Jesse coming out of the darkness of his hiding spot to pull his pistol on that “cop” — and action sequences, as Jesse’s search and subsequent escape from Todd’s apartment stands as the most traditional Breaking Bad arc in the film.

From there, El Camino enters its endgame, as Jesse heads to a place most fans predicted he would: the vacuum disappearer guy. After an intense encounter that further reveals Jesse is slowly but surely becoming more of himself and less of the beaten dog he was at the beginning of the film, he’s turned away from the disappearer as he finds himself $1800 short due to the debt he owes for the first time he turned his back on the vacuum guy, providing yet another ingenious tie-in to Breaking Bad‘s previously existing plot.

While Pinkman’s mission to retrieve additional funds from the two fake police officers at Todd’s apartment serves as your standard action-packed set-piece, it’s what happens before — his final conversation with his parents — and after — his quiet diner breakfast with Walt — that create two of El Camino‘s most emotional moments (in fact, the Walter White scene is worth its own post in and of itself).

Rather predictably — after all, he wouldn’t just make it this far only to be killed, which is an inherent flaw in El Camino’s otherwise sound tension — Jesse retrieves the money, pays his debt to the vacuum man, and makes his escape to Alaska, a destination that he’d mentioned frequently throughout the course of Breaking Bad.

Gilligan, directing a proper feature film for the first time, potently saved El Camino‘s most powerful gut punch for its ending, as the now free — yet still severely and permanently, physically and emotionally scarred — “Mr. Driscoll” seamlessly transforms into the younger, innocent version of himself from a time gone by with Jane at his side. It’s an obvious emotional ploy from Gilligan but it works, as seeing the yellow hoodie and youthful exuberance of Jesse’s ghost brought home everything I’ve felt for his character over the course of the last decade.

It’s a harrowing reminder of just how far Jesse Pinkman’s descent into darkness has gone, and although he may now be free of body, he’ll never be free of mind and spirit, as the pain of what he’s experienced and who he’s lost will never wash away no matter how far into the mountains he runs.

And in the end, that’s what justifies El Camino‘s existence: because Jesse Pinkman deserved it. When he was locked in his Neo-Nazi cage, he — like we used to prior to the film’s release — merely imagined his freedom. Now we can both see it with our own eyes and while it may never be perfect, it’s more than we had before and we should just be glad we have it now, especially when considering how beautiful it is.