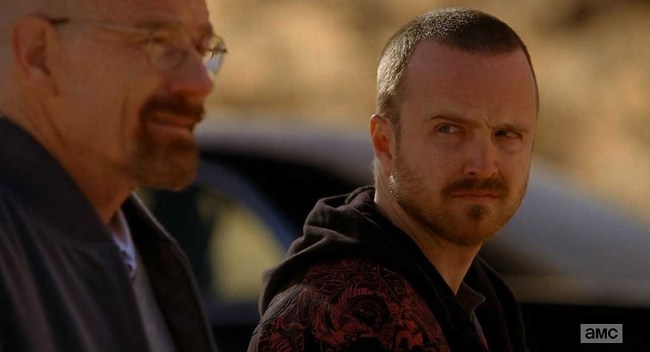 Is the “bitch” back? He might be. At least that’s what fans of Jesse Pinkman and Breaking Bad think after Aaron Paul posted a mysterious Instagram photo of himself standing next to a AMC Network truck.

Plus, as if the photo itself wasn’t enough to send Breaking Bad fans into a frenzy, Paul also captioned the picture, “Good morning old friend.”

So does this mean the long-awaited appearance of Aaron Paul as fan favorite Jesse Pinkman on the Breaking Bad prequel Better Call Saul is going to happen in season four?

We have already been treated to seeing the pre-Breaking Bad versions of characters like Mike Ehrmantraut, Gustavo “Gus” Fring and Tuco Salamanca, but bringing back Jesse? That would be special.

Bryan Cranston has already said he would like to see Walter White make an appearance on Better Call Saul.

“You know, here’s the thing. I owe Vince Gilligan so much. He was my champion to get this role,” said Cranston. “If they were to call me and say, ‘We have this idea, we’d like…’ I would say: ‘Yes, you don’t have to finish the pitch, I’m there, what do you want me to do?'”

And when Aaron Paul was asked about the idea of Jesse making showing up on Better Call Saul during an appearance on Ellen, his response was, “God, I hope so. Maybe I already shot the… They just wrapped up the last season so maybe I could be on it. I would love to be on it.”

Now, with Paul posting that photo with that caption, it’s got to be happening, right? RIGHT?!

It better be. Bitch.