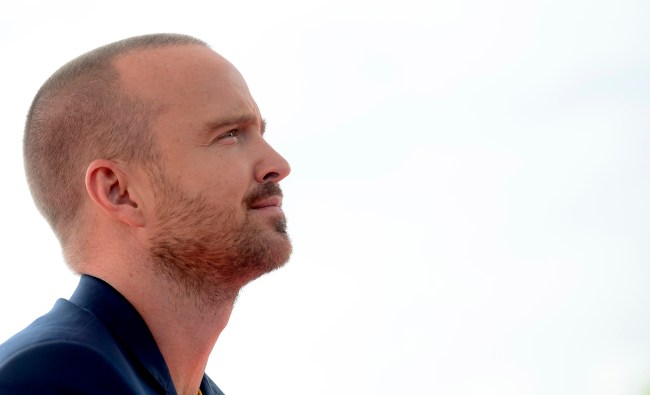 Aaron Paul’s firmly embedded in Hollywood’s ‘A-List’ of celebrities these days. All it took was for him to appear alongside Bryan Cranston in Breaking Bad as Jesse Pinkman, one of the most critically acclaimed TV shows ever made.

His celebrity status is growing exponentially after reprising the role of Jesse Pinkman for El Camino: A Breaking Bad Movie on Netflix and he’ll star in the next season of HBO’s Westworld. Toss in his 69 episodes of BoJack Horseman, 14 episodes of Big Love, and a ton of other movie/TV credits and we begin to see that life is good for Aaron Paul.

According to reports, Aaron Paul’s net worth is estimated to be somewhere around $16 million. It’s weird to think about him going shopping for his own sneakers or stealing clothes but that’s exactly what we’ve got here.

In the latest episode of Sneaker Shopping on Complex’s YouTube channel, Aaron Paul goes shopping with Joe La Puma at Stadium Goods in NYC. He talks about the things he stole from the Breaking Bad set, his own personal style + Jesse Pinkman’s style, and more.

So I usually end these Sneaker Shopping articles ranting about how I refuse to believe these guests are actually paying their own money for sneakers but 9 times out of 10 the guests are athletes or rappers, people sponsored by either Adidas or Nike, and I assume someone’s out there to pick up the bill after the celeb throws down their credit card.

This time, I’m not so sure. It seems like he’s actually shelling out his own cash for these shoes and he doesn’t seem at all disappointed about dropping $3,787.76 on sneakers. That’s a bill that would really chap my ass but I’m also not worth an estimated $16M like Aaron Paul.