Aaron Rodgers Shows Up To Packers Camp Rocking Absurd Fit, Yet Looks As Ready As Ever To Snatch Souls 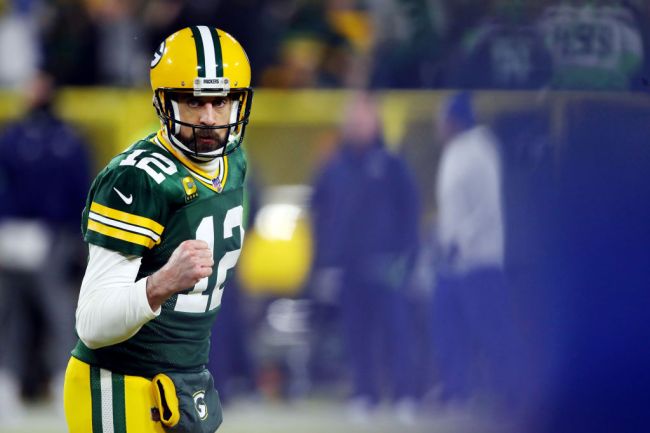 To borrow from Marc Jackson, “Mama, there goes that man.”

If you haven’t been following along with the NFL this offseason, good for you, because it’s been nothing but Aaron Rodgers playing mind games with his ex-girlfriend (the Packers) while getting engaged to his new girlfriend (Shailene Woodley) and 43-year-old Tom Brady — who appears to have gotten so much plastic surgery done that his wax museum as Madam Tussauds looks more real than he does — appearing on countless podcasts to pull a Frank Constanza and air his grievances about the teams that passed on signing him.

Back to Rodgers, though, who finally and somewhat miraculously decided to end his Green Bay holdout over the weekend after the organization gave in to some of his contract demands. The reigning NFL MVP showed up to Packers training camp on Tuesday morning rocking an objectively absurd fit:

And yet, because he’s Aaron Rodgers, not only does he pull it off, but he looks as ready as ever to snatch the souls of the league’s other 31 teams, regardless of the amount of weed he’s probably been smoking in Hawaii with Shailene.

Effectively, Rodgers is returning to Green Back for one more season, as the team has agreed to void the 2023 year in his contract, which was the last year in his current deal. Rodgers, who hasn’t played in a Super Bowl in over a decade, will be 38-years-old by the time the 2021 season ends.

Rodgers and the Green Bay Packers will open their season at the Superdome in New Orleans on Sunday, September 12.