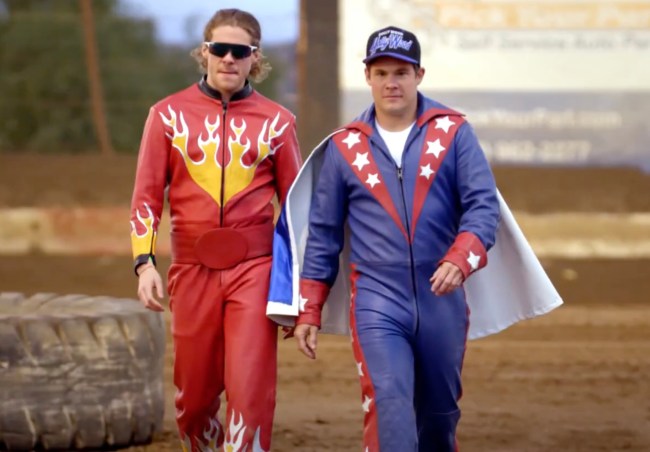 For example: A couple years ago, I found myself off-roading in a Toyota Tundra in the mountains outside Las Vegas. I misread a boulder in the middle of the trail, took the left tire a little too high and next thing I know, I’m on a 30 degree angle, waiting for gravity to topple the entire truck sideways. As a dipshit who didn’t really know what he was doing, it was certainly a bad idea. It required some quick maneuvering to get the truck off the rock, but hey – at least it didn’t end with it on its side.

I laughed it off, sure, but still barely slept that night – my nerves completely rattled.

Comedian Adam Devine spent the last year on the road filming a series of bad ideas. For example, exploring a plane filled with venomous snakes and swimming in a piranha-infested river with raw meat wrapped around his waist, all to mend a fence.

BAD IDEAS WITH ADAM DEVINE is Adam’s twisted take on an adventure series. In each episode, he and a famous actor or comedian will travel to a new location in search of adventures that are already inherently dangerous – only they’ll add their own extra special sauce to ensure they are truly terrible choices.

Entering a chili pepper eating contest with the most scorching peppers on earth… when you don’t like spicy food? Unwise. Visiting a haunted place… to purposely conjure a demon? Wouldn’t do it. Driving the narrow cliff trail aka The Death Road in South America… in an ice cream truck? No thanks. Yet for Adam and his friends, this ill-conceived way to experience the world is just their (bad) idea of travel.

A little bit of Jackass, a little bit of Man Vs. Food. In a nutshell, the streaming content equivalent of a Hold My Beer moment. Guests joining him in these misadventures include his buddies from Workaholics – Anders Holm, Blake Anderson, and Rebel Wilson, along with “CJ” Lana Perry and Thomas Middleditch.

Catch it on Quibi and see if Adam Devine keeps all his appendages attached.