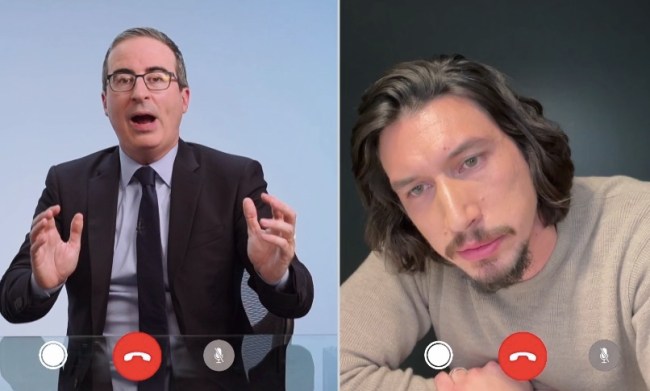 For the majority of a seventh season that first began back in February, Emmy Award-winning Last Week Tonight host John Oliver has been doing a bizarre running bit that consists of him essentially describing the violently sexual things he wants Adam Driver to do to him, such as tying his fingers into a square knot or pulling his heart out through his ear.

“Do you realize over this past year what you’ve asked me to do to you? Collapse on your chest. Tie your fingers in a square knot. Step on your throat. Shatter your knees. Pull your heart out through your ear. What’s wrong with you? You realize we’re strangers, right? I don’t know you. And now, random people on the Internet stan us, claiming that you thirsting over me is a mood.”

Adam Driver finally confronted John Oliver on the season finale of @LastWeekTonight and came with a list of the things Oliver has said about him this year 😂pic.twitter.com/eJZNmVPKPs

Similar to the 2016 finale, Oliver concluded the season seven finale episode by “blowing up” 2020, something I’m sure we all wish we could do.

I agree with John Oliver: Fuck you, 2020. Get fucked.#LastWeekTonight pic.twitter.com/Tr0xWzv5FZ

Oliver also finally exited the giant “white void” that he’s been hosting from, suggesting that whenever season eight of Last Week Tonight does air, it will once again be in front of a live studio audience.