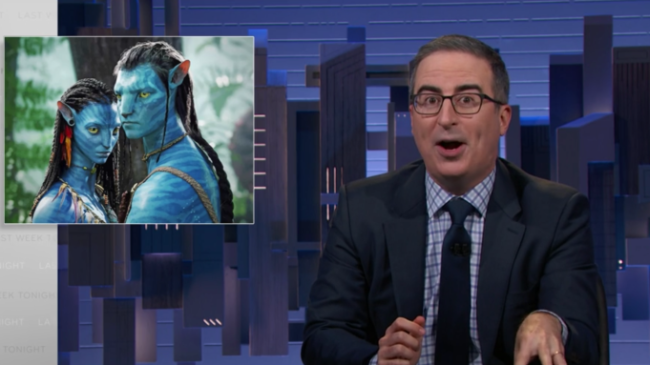 John Oliver, fellow Liverpool fan, welcome to the Resistance, brother — our numbers are growing by the day. It’s been a long fight and a largely cold war, but the day of reckoning nears as our enemy threatens to return, after a 13-year retreat, next Winter when the alleged Avatar sequel — Avatar: The Way of Water (yes, seriously) — hits theaters next Winter.

But with every passing day, as the hour of our great battle draws near, our power only multiplies. You see, once people realize that there are Avatar sequels coming, they remember that they, in fact, do not care about Avatar. Their awakening also serves as their entry into our unit. Whether it be the average moviegoer or the host of an Emmy-winning late-night talk show, the Anti-Avatar Resistance in onboarding patriots at an unprecedented rate, with John Oliver merely being the latest.

“There are things it’s ok to take a decade on and not deliver on: the Avatar sequels, for instance. Take your time on those, James Cameron. No one gives a shit. I will give anyone in this audience $1,000 right now if they remember either of these characters’ names,” Oliver said as a photo of Sam Worthington and Zoe Saldana’s characters in the film appeared on screen.

As for our next move, it remains what it’s been since 2009… we wait. Wait to see if Cameron actually does deliver a sequel, something he’s been promising for over a decade (the first Avatar sequel was *originally* slated to hit theaters back in 2014!). If and when that first piece of marketing material does arise — whether it be a first-look photo or a poster or a trailer — we’ll arise. But until then, continue to recruit fellow believers. Continue to loathe Avatar with every ounce of your being. Our time of box office vengeance will come. And if it never does? Even better, because that means the movie never happened.