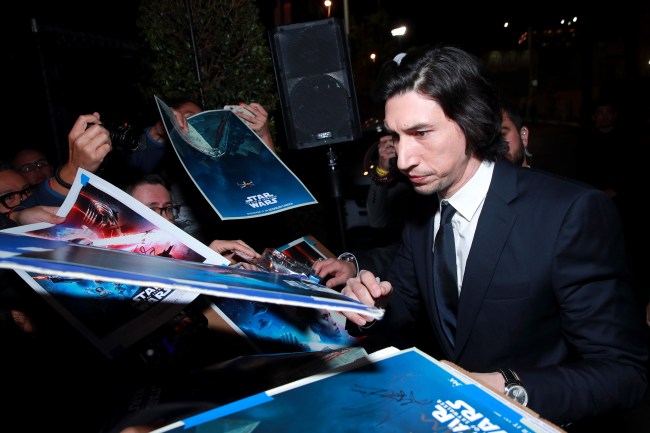 Most of us hear our own voices on camera and want to swan dive off a high place, which is precisely why we never considered taking up the acting profession.

Adam Driver is this way too, but he somehow managed to ascend to Hollywood A-list status and a guy my girlfriend wants to have intercourse with.

The former Marine is in the midst of promoting the handful of high-profile movies he’s starred in as of late, and during an appearance on NPR’s Fresh Air, Driver’s aversion to hearing/seeing himself on camera came to a head.

According to the Daily Beast, the 36-year-old walked out of an interview earlier this month after expressing irritation at the idea of listening to a clip of himself singing “Being Alive” from Noah Baumbach’s new Netflix movie Marriage Story.

Fresh Air host Terry Gross then encouraged Driver to remove his headphones when the clips were being played, but this didn’t suffice.

Danny Miller, Fresh Air’s executive producer, confirmed that Driver left during a break in the interview “while we were playing back a clip from the film.”

The irony is that Adam Driver was really fucking good in Marriage Story. Top to bottom. Like he’s probably going to get on of those golden man trophies for it.

But, a cursory study of Driver’s idiosyncrasies reveals that the dude is so self-critical of his craft that he simply can’t enjoy his previous works without being set off.

In a New Yorker profile in October 2019, journalist Michael Schulman described Driver’s disinclination to watch himself as a “phobia.” Driver himself said he felt “like I had to puke” during a première of Star Wars: The Force Awakens and even hid out in the greenroom during a screening of BlacKkKlansmen.

He also refused to see Lincoln, even though he had a tiny part in it.

Adam Driver, one of the more sincere and dedicated actors you’ll meet, has often spoken about his phobia of watching himself. He was funny about it in this story of mine from 2017 pic.twitter.com/geUjSIWX53

In a Fresh Air interview from 2015, Driver refused to listen to an audio clip of himself.

“I don’t want to hear the bad acting that probably was happening during that clip,” Driver joked in response at the time.

“Does it throw you off to hear yourself?” Gross asked.

“Yeah, no, I’ve watched myself or listened to myself before, then always hate it,” Driver said. “And then wish I could change it, but you can’t. And I think I have, like, a tendency to try to make things better or drive myself and the other people around me crazy with the things I wanted to change or I wish I could change.”

I feel you, Adam. I have a tough time revisiting my blogs. The only difference is: your work doesn’t suck.