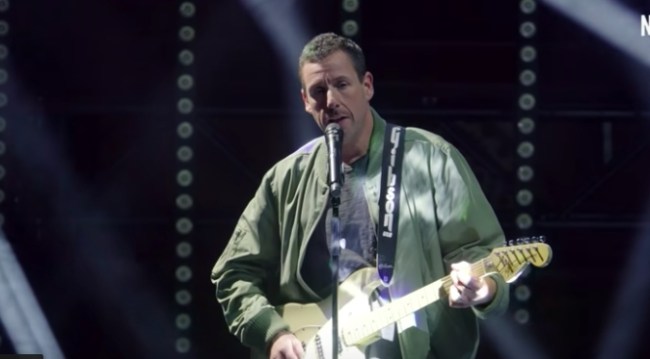 Adam Sandler’s Netflix special 100% Fresh was some of the best comedy he’s produced in over a decade, with the actor delivering original songs and stories in the same comedic vein that catapulted him to comedy supremacy in the 90s.

The 52-year-old sat down with Punch Drunk Love director Paul Thomas Anderson Wednesday night for the special’s FYC event in Los Angeles, with Anderson moderating a panel after a screening for Emmy voters (100% Fresh is eligible for the Outstanding Variety Special Pre-Recorded category, among others).

The conversation shifted to Sandler’s tribute song to Chris Farley that was featured in the special before the comedian performed in live on Saturday Night Live this month. The lyrics of the song pull at the heartstrings of anyone who holds Farley to a high esteem.

“The last big hang we had was at Timmy Meadows’ wedding party / We laughed our balls off all night long, all because of Farley,” the lyrics go. “But a few months later the party came to an end / We flew out to Madison to bury our friend / Nothing was harder than sayin’ goodbye / Except watching Chris’s father have his turn to cry.”

Sandler discussed how difficult it was to perform it on SNL, the place where the two cultivated their relationship.

Sandler also revealed on the panel that before he included the tribute in 100% Fresh, he called Chris Farley’s mother, Mary Anne Farley, to get her approval.

“Mrs. Farley was really happy and said, ‘I love that. I love when anybody talks about Chris, but you really knew him, and that would be very special for my family.’ So I had that in my head when we were recording,” Sandler said. “I had some weird pressure in my head. I just wanted to make sure I did it right and did him justice.”

If I had a nickel for every time I said “lay off me I’m starving” to someone trying to grab my fries, I wouldn’t have a 340 credit score.