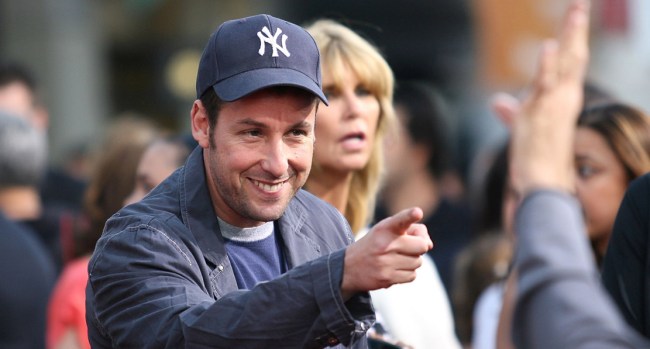 Say what you want about the quality of his movies, Adam Sandler has been making bank for years and also seems to know where his bread has been getting buttered all this time.

Much like when Adam Sandler discovered his doppelganger online and did something truly awesome for him, he once again did something for his fans that they will be guaranteed to never, ever forget.

A Montreal couple, Alexandra Steinberg and Kevin Goldstein, were getting ready to say their vows on Sunday and were going about taking the usual pre-ceremony photos when much to their surprise an unexpected guest arrived: Happy Gilmore himself.

While having lunch with his family in Montreal, the bride spotted Sandler and waved at him. Little did she know what would happen next.

“My wife yelled his name”, Kevin Goldstein told the BBC. “We were taking photos. He came over and wished us well, he was just chatting to us.

“We told him we’re huge fans, we love his work, we’ve watched all his films.

“He replied, ‘Good, I’ll take some photos then – mazel tov!’

“My wife invited him to the wedding – he couldn’t make it, but she was ecstatic, absolutely over the moon. We couldn’t believe it.”

Kevin was really friendly and kept saying how grateful both he and his wife were that Adam Sandler took the time to not just do a couple photos but properly chat to them too. Class act 😀😀😀https://t.co/4JOKOMyiQ9

Kevin also told the BBC, while on the newlyweds’ honeymoon in Italy, that Sandler was “the nicest guy.”

How cool is that?

i wish adam sandler had crashed my wedding

The actor walked over to congratulate the newlyweds and posed in several photos with them pic.twitter.com/7C3fv7wNhT

But did he sing? pic.twitter.com/UjMDLmTBRD