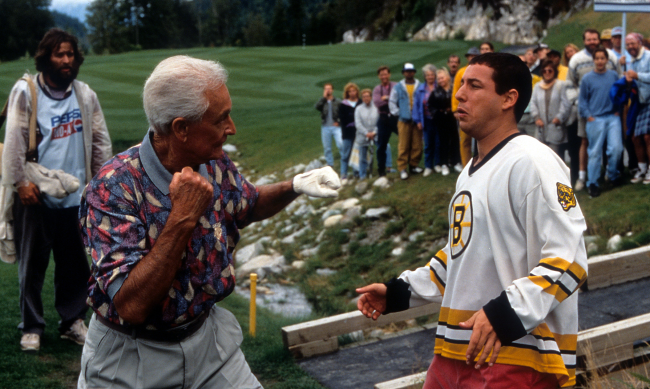 That’s right. Adam Sandler was reportedly once pitched a Happy Gilmore video game for Xbox and it sounds like it would have been absolutely amazing.

The decades-old pitch by developer Digital Eclipse for a Happy Gilmore video game was recently brought to light by game developer Mike Mika on Twitter.

According to Mika, “At one point we were pitching this hybrid fighting and golf game with the Happy Madison crew. Good times. It should have been greenlit because it was a great idea.”

At one point we were pitching this hybrid fighting and golf game with the Happy Madison crew. Good times. It should have been greenlit because it was a great idea. pic.twitter.com/Ty03MNQoP8

Yes. It was a great idea. A video game that combines golf with fighting between Happy Gilmore, Bob Barker, Shooter McGavin and the rest of the crew would have been incredible.

Mika added in another tweet that the classic video game Ninja Golf “was totally an inspiration” and that their tech director at the time actually worked on the Atari 7800 game.

He also said that Abraham Lincoln and the Alligator would have been unlockable characters!

What makes this news even more disappointing is that, according to Mika, Adam Sandler himself was allegedly all for the idea.

“He was on the periphery of it all-super supportive,” Mika tweeted. “His brother was amazing, he was the ringer in trying to get these companies to get off their ass and also to get the right deal. We did Little Nicky with them and they were the absolute best group to work with.”

So… why on earth did this Happy Gilmore video game not get made? Who knows?

Mike did tweet, “I [tried] really hard as did Adam, Allen, and Nick from HM. It seemed like a slam dunk.”

Oh man… we had some plans. You wouldn’t be disappointed.

Mika later tweeted, “With @Netflix getting into games, I bet they’d back a Happy Gilmore game…. Hmm… @UnrealEngine 5 + @happymadison + Digital Eclipse. Get the band back together and finally ship this beast.”

The best thing is the moment you meet them they make you feel like one of the guys. Got to know Allen Covert & @NickGoossen more than anyone else and they were so rad and moved mountains. We all wanted to do Gilmore b/c they were so fun to work with – it was contagious.

This still needs to happen. Based on the comments on Twitter it would, like everything else Adam Sandler does, make a fortune.