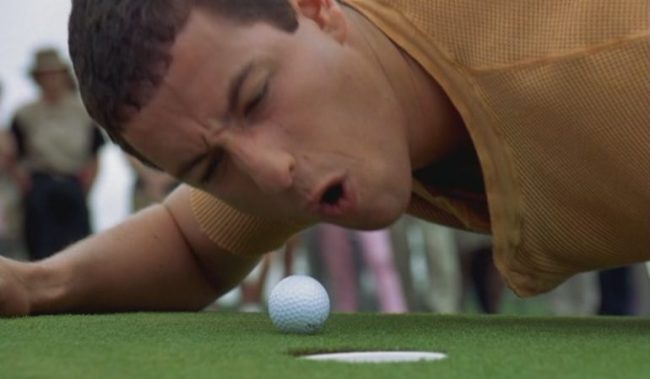 Believe it or not, it’s been 25 years since ‘Happy Gilmore’ hit theatres. On the 25th anniversary earlier this month, Adam Sandler showed off that he can still pound a golf ball with his Happy Gilmore swing and Chris McDonald fired back at him in typical Shooter McGavin style.

‘Happy Gilmore’ truly is a classic, anytime it’s on TV you simply have to watch it and odds are you can quote plenty of lines from the movie.

While ‘Happy Gilmore’ is irreplaceable, people have been shouting for a ‘Happy Gilmore 2’ for years now. A sequel would have impossibly large shoes to fill, but why not? I mean, if Sandler can do not one, not two, but three ‘Grown Ups’ and ‘Hubie Halloween,’ what’s the harm in giving ‘Happy Gilmore’ another go?

Sandler and McDonald joined ‘The Dan Patrick Show’ on Wednesday and Patrick asked them about the possibility of a sequel. While Sandler explained that it had not been discussed at an official level, he knows people have been begging for it on the Internet. Both Sandler and McDonald said they’d be interested in doing ‘Happy Gilmore 2.’

The premise for ‘Happy Gilmore 2’ would be pretty simple. You’d have Gilmore and McGavin battle it out on the senior tour, which would open up opportunities for old folks jokes, which everyone loves.

Sandler is in, McDonald is in, and I’m sure Julie Bowen – who played Virginia Venit – would be interested as well. Patrick went ahead and jokingly greenlit it on the show, so let’s make it happen.