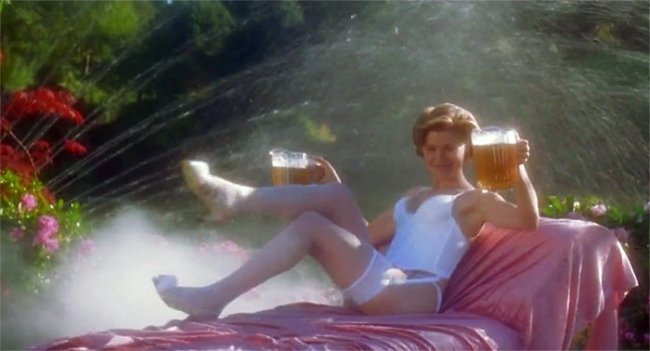 It was 25 years ago that these immortal words of wisdom were proclaimed: “The price is wrong, bitch.” Happy Gilmore, Adam Sandler’s cult classic comedy about a golfer who doesn’t want to be a golfer, has delighted nearly all audiences – except for the Mister Mister lady. Julie Bowen is the actress who portrayed “Pro Golf Tour” public relations director Virginia Venit, who thought she was “just friends” with Happy Gilmore but ended up dancing to the romantic duet Endless Love by Lionel Richie and Diana Ross at an after-hours skating rink. Bowen gave her insights into Happy Gilmore 25 years later.

Of the romantic skating rink scene, Bowen said, “I was so nervous to do that, I was like, ‘Oh, is it too earnest? Is it too serious?’ And then you see the movie and you’re like, ‘No, don’t worry, the more earnest and serious the better. And the [Zamboni driver] mouthing Endless Love along with it!”

Bowen revealed to Yahoo Entertainment, “At the time I just thought, ‘Oh, no one will ever see this.’ And I couldn’t have been more wrong.”

“It still just really cracks me up every time,” Bowen said of the hockey/golf comedy. “And just thinking about that day and nobody [knew] for sure how it was gonna go. On paper maybe it sounds like it was gonna be funny… But boy, was it funny.”

“I cherish and I love that it has become this weird, internationally beloved thing,” Bowen told People magazine. “Doing an Adam movie isn’t pressure, it’s fun and it’s like going home. He puts everybody’s comfort and ease first and foremost, and wants everybody to be happy to be there. There’s no stress, no yelling and screaming, it’s just a really pleasant place to be.”

Bowen reveals that she was gifted a truly bizarre Happy Gilmore-themed painting from Nolan Gould, her TV son from Modern Family.

“I haven’t seen Happy Gilmore in years and years and years, probably since it came out, however, Nolan Gould gave me a movie poster from Ghana and it’s painted on flour sacks,” Bowen explained.

“I got her that painting before I actually went back and watched Happy Gilmore,” Gould admitted. “I had to ask some of my friends who are fans of the movie what were the big scenes. Like, ‘Did Julie have a big scene in it?’ I didn’t know! And they said, ‘Yeah dude, she has this whole Adam Sandler dream sequence, where she’s scantily clad, holding giant beers.’ And I was like ‘Okay, well that has to go on the painting.'”

“My brother told me about Deadly Prey, so, I reached out to them,” Gould said of the artists who created the intriguing movie poster. “I was like, ‘Hey my friend is Julie Bowen, do you think we could make a custom Happy Gilmore piece?’ And so, yeah, they worked with the artists in Ghana, who created this really cool painting on the back of a flour sack. And it’s awesome, because most of the proceeds of these paintings go to the actual artists themselves.”

“It’s insane,” Bowen said of the unique poster. “They’ve added blood and gore, zombies and crocodiles. It’s total insanity, there’s lizards and there’s a dead person. And there I am with Beyoncé booty. So when you say, ‘What do I think of when I think of Happy Gilmore?’ There it is, every day. My kids think it’s a horror movie, they’ve never seen it. They’re like, ‘Mom, is it scary?’ And I’m like, ‘Oh God, no. The only thing scary is how weird I look right here.'”

Bowen, 50, reunited with Sandler in 2020 for the Netflix comedy Hubie Halloween.

“He still has a lot of the same crew, the same writers, same producers,” Bowen said of Sandler’s loyalty. “So it’s not like, ‘Remember so-and-so?’ He’s right there. He’s still there. So it felt like stepping into a little train that’s been going the whole time, and I just got to jump on for a little while.”