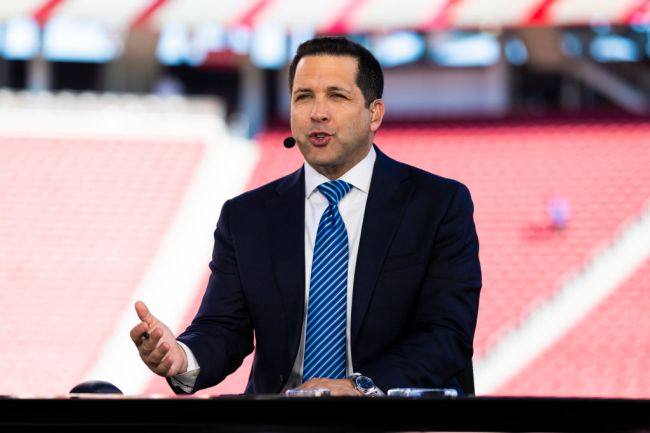 Wednesday’s game between Baltimore and Pittsburgh being played at 3:40 p.m. ET instead of in primetime because of Rockefeller Center’s Tree Lighting Ceremony was undeniably amusing. Unless you’re NBC, apparently.

ESPN’s Adam Schefter was the first to break the news and joined KNBR on Thursday to discuss his reporting. Per the longtime NFL analyst, NBC is upset with him for what they felt was a mocking tone when he reported that the game would be moved because the network didn’t want to bump the Christmas celebration to another night.

“My understanding is they want an apology,” he said. “My response is, what am I apologizing for? I reported factual…again, did I say anything that wasn’t factual? That’s my question.”

He did admit that there may have been a small laugh in the report, but he doesn’t understand why it warrants an apology.

“Let’s say there was a little chuckle there,” Schefter said. “Again, I don’t think what I did was over the top. I thought it was just like ‘Okay, well this is just in, NFL’s going to 3:40 because it’s (small chuckle) the 88th Rockafeller Center Tree Lighting Ceremony.’ Well there were people at NBC who were not happy.”

The show’s host backed up Schefter’s reasoning and even pointed out that he watched the Tree Lighting Ceremony for the first time because of the ESPN reporter’s tweet.

“I tried to highlight, in fact I tweeted out Monday night, before I was even aware they were irritated with me, that here’s the NBC lineup on Wednesday night,” Schefter continued. “I thought I was trying to shine a light on what I had to offer.”

It’s pretty hilarious how easily people get worked up these days, and this is another example of the network tension surrounding the NFL. It’s the most contentious sport out there and Schefter is one of the big dogs.

Listen to the entire interview and other episodes of the Murph & Mac Podcast here.