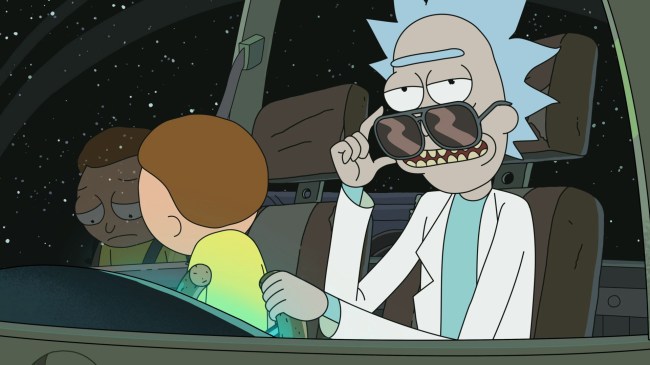 With so much more time on their hands, moms are finding more things to be angry about on TV, YouTube, and online.

An Oklahoma mom was probably having trouble sleeping after too many White Claws and Zoom chuckles with the PTO crew and casually flipped through late-night cable.

What Karen found absolutely SHOCKED her to the core.

First, to get a good idea of what we’re dealing with on a personal level, the profile for @soonergurl74 reads “wife, mom, follower of Christ, Christmas, storm chasing, college football, Boomer Sooner, XFL, speak LIFE and LOVE.”

From the jump, it’s obvious this Sooner Karen is going to go after something fun. She and set her sights on Adult Swim on Cartoon Network, a block of programming airing for 18 years, and home to some of the greatest cartoons of all time.

She tweeted out a promo that airs on Adult Swim late-night, writing:

“Cartoon Network after hours. They throw it in your face. They hope you aren’t the kind of parents who monitors what you kids watch and do. They’re busy conditioning them. What do you see here? I see witches abusing babies. This is not ok. This is not funny.”

Cartoon Network after hours. They throw it in your face. They hope you aren't the kind of parents who monitors what you kids watch and do. They're busy conditioning them. What do you see here? I see witches abusing babies. This is not ok. This is not funny. #ThesePeopleAreSick pic.twitter.com/nrx0Cnl3Jx

After her original tweet hit over 5K comments, Sooner Karen proclaimed victory and that the “darkness was exposed.”

Never realized that the post from Adult Swim/Cartoon Network was going to take off. After reading some comments, it's clear I hit a nerve. When darkness is exposed, the demons start panicking, try to minimize you and your message. They can't stop what's coming.

Trying to follow everyone back that has recently followed me after the CN tweet. I'm getting to you, but twatter is limiting me right now. 🙄 Please be patient, Patriots. I *WILL* follow back as soon as I am able to! And THANK YOU to everyone who has commented, RT and just liked!

As of this writing, Sooner Gurl’s follower account hit an astronomical number of followers – 1,952 to be exact. It’s interesting to note that Sooner Gurl finally hit that impressive number after being on Twitter for eleven years.

Naturally, Twitter was quick to pile on Sooner Gurl, explaining the entire point of Adult Swim is to air cartoons aimed at an older audience, something that should seem obvious considering it’s called ADULT SWIM and named after the time when kids are forced to get out of a pool so adults can have fun.

A couple problems with this.

1.) Its from the Adult Swim side of Cartoon Network, which is for an older audience or at least a mature one.

2.) Its an animated short they do for fun, its not meant to be taken so seriously.

For a reason, Karen
As in, not for children, playtime is over, send them to bed pic.twitter.com/mdrmSrDjxx

Apparently, people are just finding out that Adult Swim exists. Unsurprisingly, the army of Karens are up in arms about the show airing at 2am, while kids are watching.. If the kid's up that late, that's on you. Not the network. pic.twitter.com/b7374hdTJN

Conservatives want to hold Adult Swim accountable when it's been around for my entire adult life and you have to pay for it but won't hold their President accountable for making fun of the disabled, admitting to sexual assault, or encouraging racially motivated violence. pic.twitter.com/ivVVVo4QBC

Adult swim has always been for the kids pic.twitter.com/lJtMwcpxo0

What the fuck is going on here?*clicks*

*sees the reason why Adult Swim is trending*

If your child is still up by time Cartoon Network switches over to Adult Swim, that's simply on you. Should've put your kid to bed at 7:50pm, dumb fucks. pic.twitter.com/DZnsjnyQCt

Karen: “WhEn ThE DaRkneSs is exposed ThE DeMons STart PANicKing.”

Even the creator of the video felt the need to join the conversation and apologize, for some reason.

Hi! I made this video cos at the time I -thought- it would be funny to make music outta cartoon babies (that are clearly having fun being slammed around). sorry it upset you, but there is no deeper meaning here. I’m just a guy that made an absurd video in poor taste.

I look forward to the tweets of outrage once Sooner Gurl takes a moment to watch the actual shows on Adult Swim.