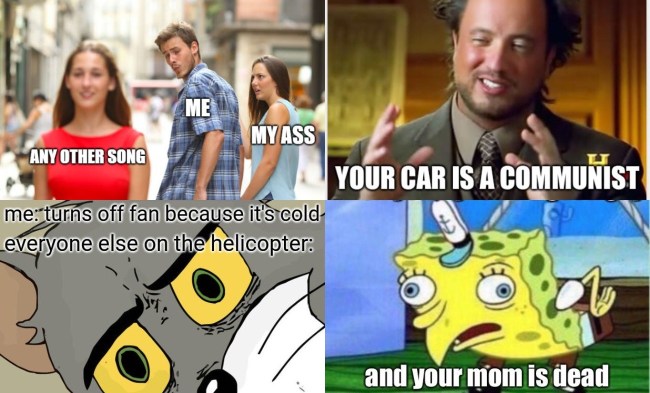 Apparently as bored as the rest of us, Imgflip founder Dylan Wenlau has spent his newfound free time developing an AI-powered meme generator and the results are truly some of the funniest pieces of internet content I’ve seen all year.

Its creator, Imgflip founder Dylan Wenlau, used his machine learning platform Tensorflow and Keras to generate the captions. His dataset included roughly 100 million public meme captions posted by Imgflip users, he wrote in a Medium post, and 48 of the most popular meme formats.

“Character-level generation rather than word-level was chosen here because memes tend to use spelling and grammar…uh…creatively,” he wrote.  [via Mashable]

there's an AI meme generator now and it's everything you could have wanted. https://t.co/MqXConOPWo pic.twitter.com/yKEHfgBPUE

This came out of that AI meme generator. Turn off the lights, the robots have won. pic.twitter.com/4Qg1e6v8WP

SO I USED THAT FUCKING AI MEME GENERATOR AND pic.twitter.com/HPFeSUfjem

good evening to the AI meme generator only pic.twitter.com/TrjHGkLRQ8

Honestly, that AI meme generator writes far better content than I ever will pic.twitter.com/P8HPnjo3ms

I tried AI meme generator for fun, not for the story of my life. pic.twitter.com/b9xtHkk2hQ

good evening to the AI meme generator only pic.twitter.com/TrjHGkLRQ8

i'm so high i've been laughing at AI generated memes for like 2 hours. they're so much better than anything man has ever made pic.twitter.com/z2eQfqp8sl

Whoever made the ai meme generator deserves a nobel prize pic.twitter.com/tAtnErnrls

They say that art is subjective and that beauty is in the eye of the beholder, and to me, this is beautiful, modern art (if you want to find more, just search “meme generator” on Twitter).

While your boy is famously anti-artificial intelligence, this meme generator may cause me to reconsider my stance on the matter. If the robots are capable of this sort of creative genius, there’s no telling what sort of powers they may possess. Before we know it, they’ll start writing symphonies, stand-up sets, and screenplays. This could only be the beginning.