Why Is Al Pacino’s Phone Case Covered With Pictures Of Shrek? 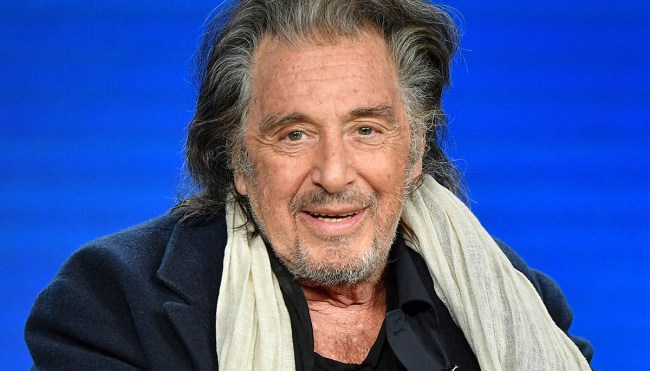 If you’re one of the billions of people who rely on a smartphone to function as a human being in this day and age, there’s really no excuse for not having some sort of case to protect your device (as well as protect you from entering the Kafkaesque hell you’ll frequently encounter when attempting to arrange for the repair of the device you normally rely on for making such arrangements).

There are plenty of factors that can play a role in the kind of phone case a person opts for: there are those who simply opt for the cheapest and readily available option, the Otter Box fanboys who spare no expense when it comes to protecting their device, and others who primarily view the case as an accessory they can use to express their personality.

Now, I can’t tell you which category Al Pacino falls into, but I really, really, really hope it’s the third one based on a revelation that recently took the world by storm.

Over the weekend, Jason Momoa shared a number of pictures from a recent outing in an Instagram post that featured him sitting at the same dinner table as Pacino following a visit to an art exhibition.

It didn’t take long for people to start focusing on the 81-year-old actor’s phone case, which internet sleuths quickly determined was covered in pictures of…Shrek.

While the evidence seemed pretty clear cut, it was kind of hard to believe that a celebrated elderly thespian who remains a Grammy short of the EGOT would be walking around with a case plastered with images of an animated ogre voiced by Mike Meyers.

However, someone who was very invested in getting to the bottom of the matter sent a DM to Pacino’s daughter Olivia, who confirmed the case does, in fact, belong to her father.

please stop arguing in my mentions over the credibility of a SHREK phone case 🧍🏽‍♀️ anyways here’s his daughter confirming it is in fact a shrek case https://t.co/y5fVYj7GHY

I have so many questions, and while I doubt we’ll ever get any answers, I’m kind of fine with this being one of life’s unsolved mysteries.