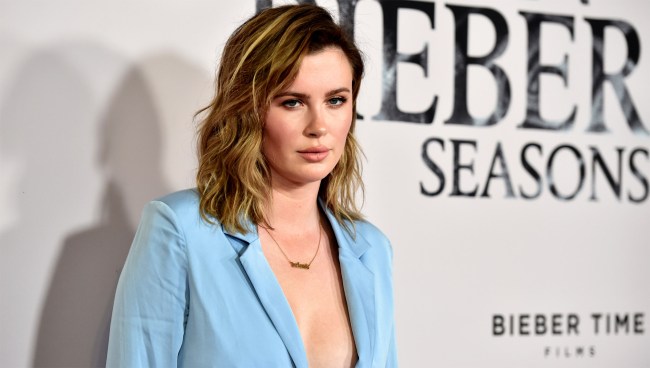 Ever since her father Alec Baldwin accidentally shot and killed Halyna Hutchins, the cinematographer of his latest movie, Rust, his daughter Ireland Baldwin has been fighting back against trolls on social media.

After initially expressing her condolences and showing support for her dad, the 26-year-old said seven days ago that she was “going to take a little break on here other than some required posts I have to post for work in the upcoming week.”

That didn’t happen as she continued to share on social media, including posting a comment from someone about her dad amidst “some of the most abhorrent and threatening comments, emails, text messages, and voicemails” she’d been getting.

Also among the items Ireland Baldwin posted on social media were some photos of her and her boyfriend, Andre Allen Anjos (AKA RAC) dressed up in bloody costumes and with blood on their faces for Halloween.

“So we stayed in for Halloween this year,” Baldwin wrote. “There are reporters and paparazzi hanging out all over my street being super fun and invading all my privacy which is always a good time. We didn’t think we would celebrate, but we found some old costumes and blood, ate really good food, drank tequila, had a couple friends over, watched a scary movie and had 0 trick or treaters…. How was your Halloween? Raise your hand if you went as squid game this year.”

As one might expect, her choice of costume, particularly with all the blood, didn’t sit well with a lot of people.

“I’m completely sympathetic to you and what you and your family are going through now,” one person commented. “What happened to your dad was an extremely unfortunate tragedy. But the optics of this costume, at this time, are not good. You should do you, but I wish you’d thought better of posting these pictures.”

“Pretty thoughtless ‘costume’ to post, considering the circumstances,” another person wrote. “Did it ever occur to you that you could’ve enjoyed all those activities you mentioned without posting them to social media?”

It was that comment that sparked a reply from Ireland.

“Eh no. This is my social media and whatever you have to say doesn’t really doesn’t dictate how I’m going to chose to live my life,” Baldwin replied.

“I feel destroyed for Halyna’s family who have to spend the holidays without her… There’s nothing I can personally do to change the situation.

“This has affected many people in different ways and maybe that hasn’t quite occurred to you… being somebody who couldn’t be more removed from this situation. It’s been a tough time for my family, and I decided to dress up and celebrate Halloween. Have a good one.”

That wasn’t good enough for some.

“The fact that you and your family are even posting at all during a time like this is just senseless,” someone replied. “If you all felt anything at all, ANYTHING, you’d be tf off social media and legitimately mourning. The fact that it’s been such a short amount of time and you’re already online trying to act like nothing happened at that you and your family “deserve” some peace and quiet – you don’t deserve anything. The public has a right to be concerned and outraged at this tragedy, and we also have a right to encourage a thorough and thoughtful investigation (regardless of the ignorant behavior of you and your family).”

Ireland’s dad Alec Baldwin confronted paparazzi over the weekend in Manchester, Vermont, where he has been staying since the shooting.