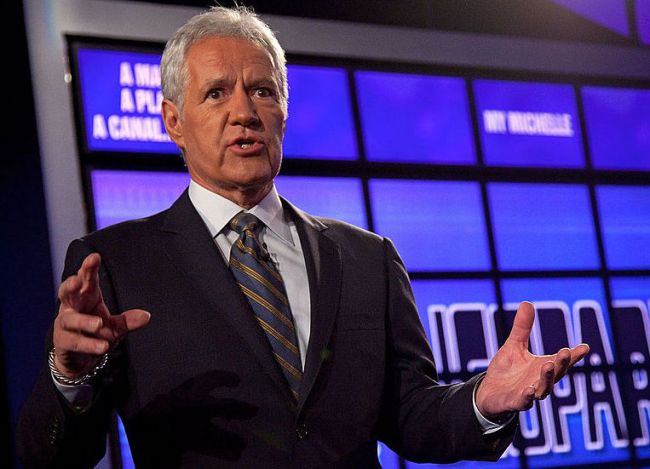 Over the weekend, the world added yet another entry to the “Reasons 2020 Sucks” list following the passing of Alex Trebek, who succumbed to the pancreatic cancer he’d been fighting since being diagnosed with the disease a few months into 2019.

The weeknight television staple had served as the host of Jeopardy! since first making his way to the podium in 1984, and in the following decades, he’d become a constant source of comfort for countless people inhabiting a world filled with uncertainty who knew they’d be able to escape to the friendly confines of Sony Pictures Studios’ Stage 10 for a few rounds of trivia interspersed by ads for arthritis creams and life insurance policies.

Trebek is one of the rare figures in the entertainment industry who managed to navigate the ruthless world of show business and emerge entirely unscathed, leaving behind an impressively untarnished legacy that is perhaps no more succinctly summed up by one of the best tweets to come out of a day filled with tributes to the legendary game show host.

alex trebek was proof that you can be a kind person who also bullies nerds, 100% legend

As someone who has likely watched over a thousand episodes of Jeopardy!, I’ve spent the past day or so reflecting on all of the joy Trebek managed to bring into my life before his came to a peaceful end on his own terms while trying to figure out what will best define the glorious career of the man who once paid homage to his country of origin by rocking a Canadian Tuxedo in one of the most iconic photoshoots the world has ever seen.

Was it the small but distinct amount of pleasure you could detect in his voice when he announced contestants would be tasked with answering questions about sports or video games knowing the trainwreck that would almost inevitably ensue?

Rest In Peace 🙏 and never forget when Trebek would troll the nerds 😂 pic.twitter.com/OT73HiwJSq

they avoided the video game category as long as they could pic.twitter.com/ZCZj1OCi9t

Was it his ability to pronounce the word “genre” in a way only he could?

To celebrate the great Alex Trebek, let’s all enjoy him saying the word “genre” thanks to this video from @whoisalexjacob ❤️❤️❤️ pic.twitter.com/o9Y08tmDkG

Picking one particular aspect seemed like an impossible task, but in the end, it all went back to the best part of every Jeopardy! episode: listening to contestants who’d waited their entire life to regale Trebek with a supposedly amusing anecdote or allegedly fun fact about some quirky aspect of their personal life only to discover it may not have been as intriguing as they’d led themselves to believe.

One of the best moments to ever come out of these interactions took place in 2016 when a contestant by the name of Nicole revealed her love for nerdcore hip-hop only for Trebek to brand fans of the subgenre as “losers.”

While it was an objectively hilarious burn, it was a bit out of character for Trebek, who spent his time on Jeopardy! perfecting the art of quickly moving on from a story he could not have given less of a shit about with the three words capable of crushing the soul of any player who found themselves on the receiving end of them: “Good for you.”

my favorite part of Jeopardy is when contestants tell an awful story and Alex Trebek is like “um ok good for you” pic.twitter.com/dHr9Co9GBA

Slowly making my way through the 258 episodes of “Jeopardy” on my DVR and just witnessed what I believe fans refer to as “The Holy Trinity” of Alex Trebek dropping his signature “Good for you” after all three contestants shared mildly interesting anecdotes about their lives pic.twitter.com/5Do8uQjsQA

Much like “Bless your heart” means the exact opposite of what sweet old ladies in the South would like you to believe they’re saying when they utter the phrase, “Good for you” was Trebek’s patented way of saying “Don’t caaaaaaare!” in a manner that was as polite and respectful as it was absolutely devastating to anyone who got hit with it.

It perfectly sums up the personality of a man who essentially lived the life of a politician, as his job largely revolved around him having to try to pretend like he actually cared about the lives of the countless people constantly paraded in front of him. Yes, he was a truly caring man who possessed a level of grace and compassion all of us should aspire to come even close to matching during our time on the planet, and while he obviously didn’t intend for the “Good for you” to come off as actively malicious, there’s only so much someone can do when it comes to genuinely appearing to be invested in stamp collections and stories about people conquering their fear of heights by going zip-lining in Costa Rica after being subjected to them for over 35 years.

As a result, the phrase turned into Trebek’s signature tell that was basically his equivalent of Jim breaking the fourth wall on The Office when he looked at the camera; a way to essentially say “Can you believe I have to put up with this shit?” to longtime Jeopardy! fans familiar with what almost became a running joke.

In the end, it’s what made Trebek such a lovable figure; a man with an incredibly wry sense of humor and an impressive amount of restraint who still couldn’t help himself from venting in his own hilariously subtle ways every once in a while.

There’s no telling what Jeopardy! is going to do going forward, as Trebek strayed away from commenting on who he thought should succeed him when his time as the host came to an inevitable end. There are rumors Ken Jennings (who is an incredibly entertaining guy in his own right) may step into the role, and while I think he’d be a great replacement, I think even he would admit there’s no way he’ll ever be able to measure up to the game show G.O.A.T.