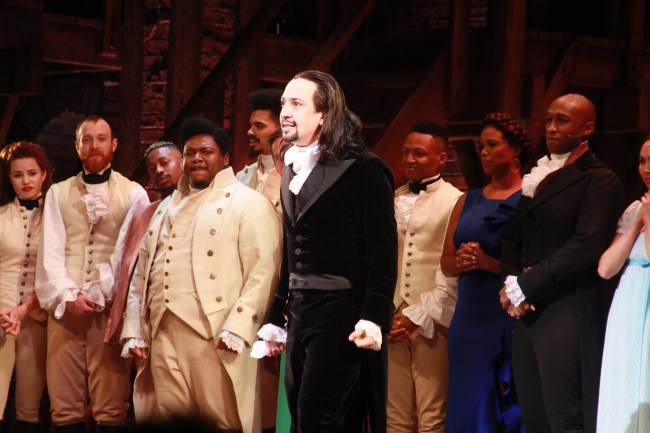 WOW. Bombshell out of Albany, folks. Jessie Serfilippi, a researcher at Schuyler Mansion State Historic Site in Albany, N.Y., is saying that Alexander Hamilton, of Hamilton fame, may not have been as progressive as we, or the forty billion people who memorized all the words to Hamilton, think:

Did the 10-dollar founding father, celebrated in the musical “Hamilton” as a “revolutionary manumission abolitionist,” actually own slaves?

“Not only did Alexander Hamilton enslave people, but his involvement in the institution of slavery was essential to his identity, both personally and professionally,” [researcher Jesse Serfilippi] writes.

“It is vital,” she adds, “that the myth of Hamilton as ‘the Abolitionist Founding Father’ end.”

Daaaaaamn. I want my $450 back for those scalped nosebleed seats I bought to see the show (original cast, obviously. Back when it was still cool to see it.) And no, it didn’t change my life. But you know what might? Watching the cult of Hamilton admiration crumble around this news. It probably won’t, but these days, it helps to believe in something.

Here’s a lyric Lin Manuel rapped as Hamilton, from the show:

Plantation states are packed with promise makers
Do you realize the precious time these legislators wasted?
Institutionalizing slavery only multiplies our troubles
Wait till the 1800’s, and their population doubles
You all know
This is the stain on our soul and democracy
A land of the free? No, it’s not, it’s hypocrisy
To subjugate, dehumanize a race, call ’em property
And say that we are powerless to stop it, can you not foresee?
Sir, even you, you have hundreds of slaves
Whose descendants will curse our names when we’re safe in our graves
How will the south find labor for its businesses?
How will Thomas Jefferson find his next mistresses?

Hypocrisy indeed, Hammy old boy. Couldn’t have said it better myself. This feels a little bit like when some internet sleuth unearths your old tweets because you finally landed your dream job, and they blast the tweets out in an article for some blog named THE BURNING TRUTH SOUP. Of course you lose the job, but a week later, someone digs into your outer’s tweet history and finds a bunch of bad tweets from THEIR high school years, and they issue some weak mea culpa about how they’re going to take some time to think about the world.

Sorta. Seems like I brought a lot of personal baggage into that connection.

Now, the researcher does throw Hamilton stans a bone:

Hamilton did criticize slavery at different points in his life, and compared with most white contemporaries held enlightened views on the abilities of Black people.

But she goes on to show evidence that he likely had slaves in his own home. A far cry from the “abolitionist founding father” we’ve been singing about for the past few years.

Oh, how the turntables. Gotta love cancelling a guy 216 after his death.