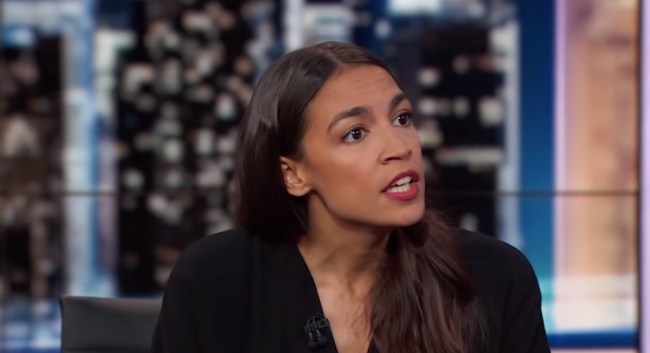 There is a video alleging that Alexandria Ocasio-Cortez is an actress who was cast to play the role of a Congresswoman. A video has gone viral with nearly 2 million views on YouTube and brings forth some questions as to how AOC grabbed the spotlight so rapidly. In what at first sounds like an Infowars conspiracy theory of Alex Jonesian proportions makes some interesting points about modern politics.

For better or worse, politics is now a reality TV landscape thanks to the unprecedented victory by Donald J. Trump in the 2016 presidential election. In the past, qualities such as morals, policies, and vision for the country were the cornerstones of being a successful politician. Now those elements take a backseat to being able to grab headlines and hold the attention in this oversaturated, ever-changing information realm dominated by social media. Politicians are now operating in a 24-hour news cycle where a lifetime of events seem to happen in a day and the tides can turn in a second.

All political parties are in search of the next great communicator who can captivate a nation, effectively disperse their message out to the masses, and capture the hearts and minds of potential voters, especially independents who can be swung. The claim in the video is that instead of elevating an established candidate, one political group invested in a talent search to find the voice of their party.

In what sounds like a reality TV show pitch, the video shows a political action committee (PAC) searching for political candidates from in what sounds like an audition. The PAC that discovered or recruited the very charismatic Alexandria Ocasio-Cortez is the Justice Democrats.

The progressive Justice Democrats PAC was founded on January 23, 2017 by Kyle Kulinski of news and commentary website Secular Talk, which is self-described as “libertarian-left; populist; social democratic; agnostic-atheist perspective” and Cenk Uygur of progressive left-wing YouTube account The Young Turks. The group also has ties to leadership from Bernie Sanders’ 2016 presidential campaign.

Before Alexandria was known around the world as @AOC, there was a movement that encouraged her to run.

After her election, she talked with the founders of Justice Democrats to reflect on her historic campaign and discuss where we go from here.

“My brother told me that he had sent my nominations in the summer but I was like literally working out of a restaurant and I was like there’s no way,” said AOC. This is something that Justice Democrats does not try to hide and even released a video boasting about their unusual, but not an unheard of process.

Out of the 10,000 nominations, Cortez won Justice Democrats’ endorsement to run for Congressperson for New York’s 14th District. In the primary, the Bronx native pulled off a stunning defeat of Joe Crowley, who had served in the position mostly unchallenged for exactly 20 years. Despite being outspent by the longtime incumbent, $194,000 to the Crowley’s $3.4 million, AOC won by 15 points.

In the race for New York’s 14th congressional district, Cortez faced Republican nominee Anthony Pappas, who didn’t have a chance. The district has been dominated by Democrats since 1993 and registered Democrats outnumber Republicans by nearly six to one. AOC sailed to a November election victory in a blowout — 78 percent of the vote to Pappas’s 14 percent. She became the youngest woman to be elected to Congress.

Despite being a freshman in Congress and only being 29-years-old, Alexandria Ocasio-Cortez is already lauded as a superstar of the Democratic Party. Cortez has over 2.7 million followers on Instagram and over 3.5 million on Twitter, compared to Speaker of the House Nancy Pelosi’s follower figures of 460,000 on Instagram and 2.3 million on Twitter.

Cortez has even been compared to a superhero. Remember, this is the same person who was waiting tables and tending bar at a taqueria in Union Square last year and is now one of the most influential politicians in the United States.

AOC is the star of a new superhero comichttps://t.co/0wSkRbE29h pic.twitter.com/B0d1KjVCSw

The video titled “The Brains Behind AOC Alexandria Ocasio-Cortez” was published by a YouTube account by the name of Mr Reagan that has over 135,000 subscribers. The video is narrated by actor Chris Kohls, who plays the character of Mr. Reagan. It offers a theory as to how and why Alexandria Ocasio-Cortez was able to make a meteoric rise to worldwide stardom in a matter of months.

The video claims that AOC is not her own politician and is fed policies by the people who got her into Congress. In the video, Cortez can be heard parroting the same exact talking points and economic numbers in 2018 as her spokesman Corbin Trent was saying in 2014. Others have noticed what they perceive as a disconnect as what is written for her and her actual thoughts during speeches.

Anyone else notice how @AOC has to read her questions and seems unfamiliar with them, stumbling over the words? It's clear she didn't write them and is incapable of asking follow-ups, always sticking to the script. It'd be better if whoever writes them explained them to her. https://t.co/65HtTvxM3P

Then there is AOC’s “corruption game” speech calling for reform to campaign finance in politics, which is one of the most viewed Twitter videos of all-time.

But there are other instances where Alexandria Ocasio-Cortez sounds anything like a polished politician. This compilation from her speech at this year’s SXSW, shows that Cortez relies heavily on the word “like.”

The video alleges that AOC doesn’t make any policy decisions and that her political stances are handed down to her from her handlers that got her into office. The video also makes unverified claims that Cortez had no influence of her signature piece of legislation — the Green New Deal.

Saikat Chakrabarti, AOC’s chief of staff, disputes the claim of the “The Brains Behind AOC Alexandria Ocasio-Cortez.” In a series of tweets, Chakrabarti argues that Cortez “runs her own Twitter/IG. This is VERY rare in Congress.” He continued, “Most politicians have staff come up with what to say/figure out how to frame things. But @AOC’s knowledge of issues is so deep that she does the communicating/framing herself.”

The right-wing actually cannot believe that a working class latina like @AOC is smart, talented, and capable. They are creating entire conspiracy theories to try to disprove her intelligence. So here's some @AOC facts to show y'all just how good she is. https://t.co/yHXmuviFQJ

2) @AOC writes all her own speeches. Though, TBH, most of her 🔥 speeches are off the dome. Just watch Coates interview her. She can talk in depth on policy issues for hours (unlike most politicians) because she REALLY knows what she's talking about. https://t.co/r73Y2r4DwQ

Chakrabarti, a 33-year-old self-made millionaire tech entrepreneur, is facing his own trials as the spotlight has been thrust on him. There are accusations that Chakrabarti violated campaign finance laws.

The Federal Election Commission complaint alleges that Chakrabarti transferred $885,000 from two political action committees to private companies. This may have been an attempt to get around reporting requirements for campaign expenditures. Alexandria Ocasio-Cortez is also cited in the FEC complaint.

So is this casting call political process extraordinary because it gets ordinary citizens involved or is it dangerous because these candidates might not be experienced and possibly reliant or indebted to the organizations that got them into power in the first place and if so is that any different from the traditional Democrat or Republican parties?