All Of The Best ‘Zack Snyder’s Justice League’ Memes 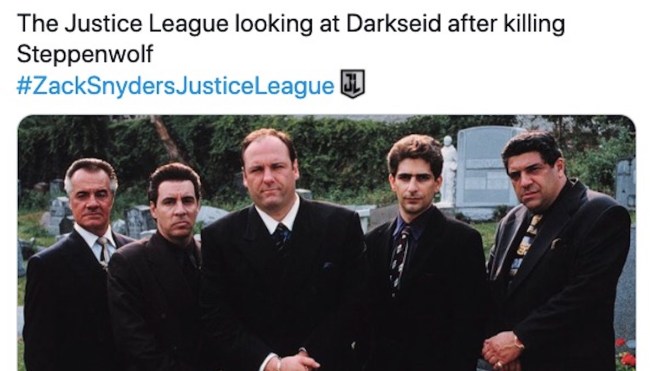 Aside from the (somewhat surprising) quality of the film itself, the internet’s reaction has undoubtedly been the most enjoyable part of Zack Snyder’s Justice League. After all, considering we weren’t able to watch this together in a movie theater, Twitter — a.k.a The Internet’s Living Room — is the best place we’ve got to discuss (and joke about) the film.

For example, immediately after soaking in just how much better The Snyder Cut is than the original 2017 Justice League (a.k.a “Josstice League”), movie fans across the globe took to Twitter to mercilessly dunk on former director Joss Whedon, making sure to let him know just how awful they think he and his movie is.

Even global movie stars got in on the fun, as former Hal Jordan actor Ryan Reynolds got drunk on gin and live-tweeted his first-ever Green Lantern viewing.

The glorious meme-ing of The Snyder Cut hasn’t only been directed at Joss Whedon’s dome piece, of course, as jokes about Zack Snyder’s Justice League itself have been flooding the internet all week.

Rest of the Justice League: *flies towards danger*

Bruce in the Batmobile: pic.twitter.com/7DfS8goZiz

Alfred: “So what did you do during the battle against Steppenwolf?”#Batman: pic.twitter.com/9b1ByXUAAj

Barry Allen simply saying "oh my goodness" when he sees Wonder Woman for the first time is the most relatable moment in the #SnyderCut #ZackSnydersJusticeLeague pic.twitter.com/L3ZUbet6lS

Diana : I have a bad feeling
Aquaman : Abort
Cyborg : Wtf help me

Every time Wonder Woman does something cool in the movie. #SnyderCut #ZackSnydersJusticeLeague pic.twitter.com/JxJSrjjOZD

Bringing this back because it's true after seeing #ZackSnydersJusticeLeague pic.twitter.com/EAaRbogvf8

How people thought the timeline would b like after #ZackSnydersJusticeLeague was released vs How it really is pic.twitter.com/Ir8FLJd4PI

The internet, man — it doesn’t matter if its a dramatic, history-altering event or something as trivial as a four-hour-long, R-rated superhero movie –, it always brings the absolute heat.

Zack Snyder’s Justice League is now — after four long years — finally streaming on HBO Max. We covered the film in-depth over on the Post-Credit Podcast, so make sure to give that episode a listen if you enjoyed the long-awaited Snyder Cut as much as we did.

What did you ultimately think of ‘Zack Snyder’s Justice League’? Was the four-year #ReleaseTheSnyderCut movement worth it? Let us know in the comment section below!