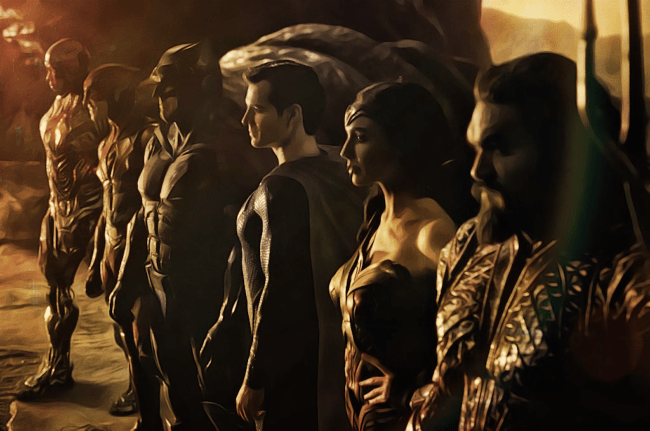 According to Webster’s Dictionary, a ‘myth’ is defined as “a usually traditional story of ostensibly historical events that serves to unfold part of the world view of a people or explain a practice, belief, or natural phenomenon.”

All societies from every corner of the world have them — from the Greek to the Norse, from the Roman to the Japanese. It’s in these stories, these tales, these legends, that cultures are revealed, their ideals crystallized for the world to see. They not only define who we were and are, but who we hope to one day be. Where idealism, heroism, humanity, and its inherent nature collide. And in the brief history of American culture, superheroes have become our titans, and their stories have become our myths. Zack Snyder understands this, and it’s in this understanding that he crafts a glorious epic that’s worthy of these iconic heroes despite its flaws.

The differences between The Snyder Cut and its Frankenstein theatrical cousin are made apparent the second the film begins. Opening with the death of Superman at the hands of Doomsday in Batman v. Superman: Dawn of Justice, the cries of the fallen god echo through the galaxy, awakening the previously dormant Motherboxes. While the film’s opening is merely reworked footage from a previous movie, it sets a tone of reverence for these beings and their stature that maintains through the course of the four-hour run-time. If Superman were to die, it would not only be a world-defining event but a cosmically significant one.

That general elevation of the characters’ pathos is the defining difference The Snyder Cut and The Whedon Disaster — whereas Batman’s mission to unite the Justice League in the 2017 film felt hollow and contrived, his determination to do right by the fallen ally he previously let down feels both thematically relevant and earned. Seeing the death of a god amongst men would change a man.

They will race behind you — they will stumble, they will fall.

But in time, they will join you in the sun. pic.twitter.com/kQ1vl3UdyG

The rehabilitation and veneration of the Justice League is palpable from top to bottom, as everyone from Wonder Woman and Batman to Cyborg and The Flash is treated with the respect that characters who’ve defined American storytelling for close to a century deserve.

The reason Snyder is able to further imbue this film and the characters that populate it is due to the film’s behemoth runtime, which represents both its biggest weakness and its greatest strength. What previously felt shoehorned — Bruce Wayne meeting Arthur Curry, Cyborg and Flash’s personal arcs, the team uniting, the resurrection of Superman, etc. — feels wholly more organic because the story is actually given the necessary screentime it needs to become three-dimensional.

Cyborg, for example, was a character who elicited a cringe every time he spoke in the original. In The Snyder Cut, he’s the heart of the time. Ezra Miller’s Barry Allen — previously grating and ineffective comedic relief — is now at the center of perhaps the film’s most beautiful moments. Every single member of the Justice League is given a moment to shine, to be revered, and that’s exactly what they’ve deserved all this time. It’s what fans have been fighting for.

Our heroes aren’t the only aspects to be properly recalibrated in Zack Snyder’s Justice League, as that improved understanding of and respect for the source material manifests itself in everything from far more terrifying villainy — Steppenwolf’s rehabilitation is nothing short of remarkable — to the impact of the film’s comedy: even though some of the jokes are the same, they land far better because of its scarcity and not its blatant injection into unnecessary moments. All of the original film’s clunkiest lines and corniest moments have been removed.

This isn’t to say that Zack Snyder’s Justice League is rivaling The Dark Knight for the title of the greatest comic book film of all-time. The action, while markedly improved, remains generic in concept. That said, the aesthetic and application of Wonder Woman’s powers are night and day when compared to the original, and are electric throughout.  Its length and the subplots that create it do drag at points. But when considering both the accelerated timeline in which Warner Bros. was trying to launch the DCEU, that length — as overwhelming as it might be at times — becomes necessary in order to give these mythological characters the room they need to develop. This expanded runtime yields direct results that tangibly improve the film by leaps and bounds, particularly when it comes to Cyborg, whose relationship with his father provides an emotional core that was entirely absent from the original. The Snyder Cut’s length is what creates its depth.

For years, fans across the globe scratched and clawed, in sometimes uncomfortably aggressive ways, turn this project from dream to reality.  No one person will be able to determine if the means justified the end, in the same way that no one hero could’ve protected Earth. But for the fandom? For the genre? For comic book and movie culture at large? Zack Snyder’s Justice League is an utter triumph, a watershed victory forged by the power of the people, the oft-commodified soul of the entertainment industry.

In 2017, Justice League was stolen from us. Regardless of its quality, the ending to a story that both fans and creators alike had invested years in was callously and unceremoniously stripped down and reassembled until it was an unrecognizable skeleton of the vision it was intended to be. The studio knew it, Joss Whedon knew it, Snyder knew it, and we knew it. And now, four years later — at the conclusion of what’s been the most fascinating saga of my entertainment writing career — that right has been miraculously wronged through a nearly impossible intersection of historic circumstances: the pandemic, the dawn of the streaming age, the unprecedented social media movement that was the genesis of The Snyder Cut. Time has been rewound, history rewritten. The masses came together to fight for what they believed in — a fight that was not for what the story was about, but the very story itself and the right to tell it. The battle has been fought and the tale has been told. It’s become a legend. It’s become a myth. That’s what the Justice League is.

If anything comes of all this #SnyderCut positivity, let’s hope it’s ‘Man of Steel 2’ 🍿 pic.twitter.com/WBECql15hz

We’ll be discussing all four hours of ‘Zack Snyder’s Justice League’ in-depth over on the Post-Credit Podcast, so make sure to subscribe and check that out when the episode drops on Thursday.

Zack Snyder’s Justice League is a glorious, overstuffed, beautiful mess. And it works.

Its great weakness, its length, is also its strength, as it allows everything that felt shoehorned the first time to feel organic now. Every hero feels like the legend they’ve always been.

Despite its length and its rating, The Snyder Cut is oddly Snyder’s most accessible, subtle DCEU film. The biggest improvement is the tone and the reverence for the characters. These are American storytelling icons — Zack Snyder understands that and how to maximize their heroism.

Would The SnyderCut have saved the DCEU? It’s tough to say. The mythological approach to these characters may still not fly with casual fans. But if you’re looking for a film that lives up to the scope of its stars, this movie does that. 8/10.