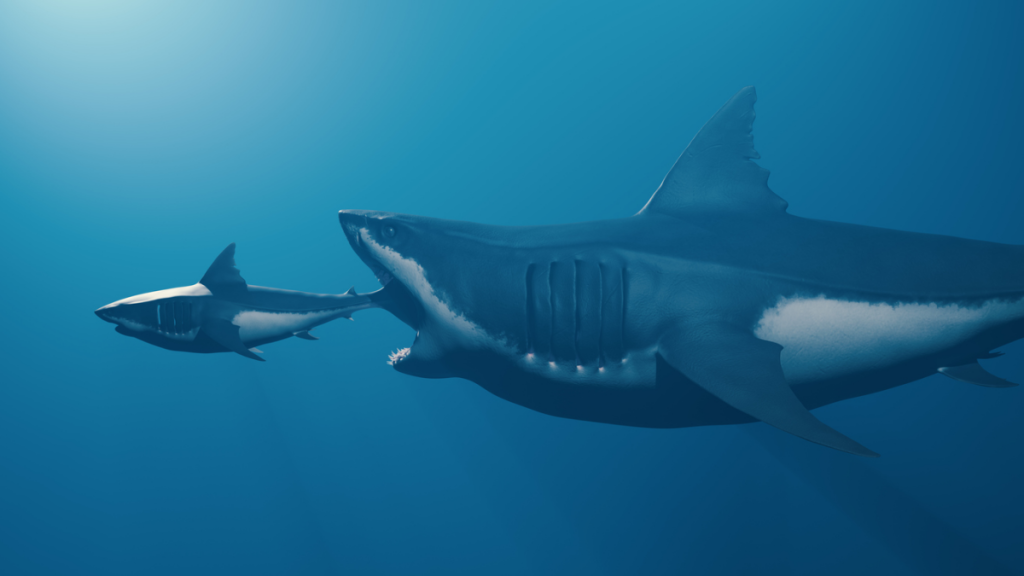 The megalodon has been extinct for millions of years. We know this because of the fossil record. But we as a society have clung to the belief that one day, maybe, we’ll find a megalodon shark in hiding somewhere because so much of the ocean is unexplored.

Otodus megalodon translates to ‘big tooth’ and it was the biggest shark to ever exist. The Meg lived between 23 to 3.6 million years ago and still fascinates fossil hunters worldwide who seek out their massive teeth as trophies.

So when a team of researchers from the Atlantic Shark Institute spotted what looked like a 50-foot megalodon on their fish finder, they were shocked. For anyone who isn’t familiar with the term ‘fish finder’, it’s a boat’s sonar system that shows what fish or sharks are down below.

What they saw was a megalodon in the sense that it was the shape and outline of a megalodon, but the meg has been extinct for millions of years. There’s no denying reality. And upon closer inspection, what they discovered was the meg on their fish finder was an interesting mirage. Here’s what they saw:

Does the Meg exist? On a recent shark research trip we were all amused to see this shape appear on our fish finder for several minutes. Based on the length of the image we estimated the “Meg” to be about 50 feet long, weighing in at 40 tons!

We waited for one of the rods to go off however, much to our dissapointment, the shape started to transition into a large school of atlantic mackeral that hung around the boat for about 15 minutes.

So close, but so far! The Megalodon (Otodus megalodon), disappeared more than 3 million years ago and will likely stay that way, but, for a few minutes, we thought he had returned!

It was just a bunch of Atlantic Mackerel…

The fact that this supposed ‘megalodon’ turned out to be a massive school of Atlantic Mackerel swimming in the shape of a shark is pretty funny for one reason: the Meg was part of the order Lamniformes which is commonly known as ‘mackerel sharks’. So we’re really coming full circle here with some mackerel imitating a mackerel shark.

There has actually been a lot of recent news about the largest shark to ever exist. Only a few weeks ago, the most futuristic study of megalodons ever done revealed just how voracious of predators these sharks once were. It was able to determine how big they really were, how fast, how much they ate, what they ate, and more.

Here is a cool video breaking all that down:

Using ‘tooth measures and comparisons with other analogous shark species’, scientists have been able to determine that Megs grew up to 20 meters or 65.6 feet in length. Fully grown blue whales are around 79 feet long, as a point of comparison.

So, how this latest study came about is the fossil record of a megalodon that ended up in a sea that would later become modern-day Belgium had a well-preserved set of vertebrae. 141 vertebrae to be exact. Somehow, these vertebrae went over a century without being studied in detail.

It wasn’t until the 1990s the 141 vertebrae were identified as part of a megalodon. Flash forward to 2019, and an international group of scientists revisited these vertebrae and used them to map out what the spine of a megalodon actually looked like.

They used 3-D scans of the fossils to reconstruct the spinal column. Then they recreated the megalodon skull using the 3D scans of a great white shark but scaled to fit the teeth of a megalodon. The final step was to create a 3D rendering of the Meg’s body based on scans from great whites. Once they added 3D ‘flesh’ to the model it really began to take shape.

There was also a fascinating research study a while back revealing their cannibal habits. You can read up on that right here.