Allen Iverson Claims He Got So Stoned In 2014, He Woke Up In A Ditch Outside Applebee’s 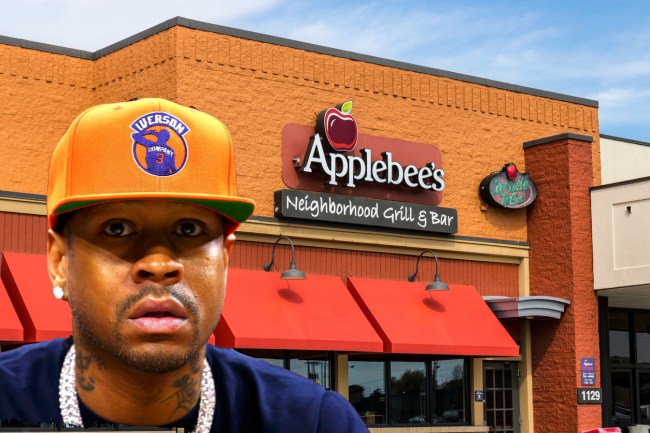 Much to the delight of Stephen A. Smith, Allen Iverson is off tha weeeeed.

Despite becoming a brand-new ambassador for Viola, Al Harrington’s cannabis business, Iverson has had one too many traumatic reefer experiences to test his fate with the drug that led to his arrest in August 1997 and subjected him to random drug tests every month for two years.

“If a muhfucka gave me a billion dollars right now and said they just needed me to hit this blunt, I would not do it,” Iverson told GQ for a recent profile. “I swear to God on my life. Kill me dead if I’m lying. That scared the fuck outta me.

[Related: Allen Iverson Onces Got So High With Biggie That He Confused Janet Jackson With A Cartoon Alien]

The 46-year-old Hall Of Famer did, however, pull the curtain back on some of his wildest weed experiences, including a scarring night at a Virginia Applebee’s in 2014 with a man he describes as “Top Muhfuckin Smoker.”

Iverson and “Top Muhfuckin Smoker” headed to an old refuge of Iverson’s, Applebee’s, to get some grub before a party appearance. They lit up outside the restaurant and Iverson started buzzing. “I’m alright! I was fine! Fine like a muhfucka. But, then, I just felt it, dog,” Iverson says, grabbing his chest and wobbling like a penguin to demonstrate.

Iverson told his buddy he needed to recalibrate, so he embarked on a quest to find a Corona beer (apparently they did not serve Corona at Applebee’s).

“I start walkin’ up an interstate. A interstate! N-gga, I’m on the interstate wit cars flying by just walkin’ down the road trine find a bar!” He got kicked out of the bar. Why? Because Allen Iverson doesn’t carry ID in his home state. As he told the bartender that night: “I don’t have no muhfuckin’ ID.”

Iverson then sauntered all the way back to his car in the Applebee’s parking lot where he started thinking about “all the worst shit in the world.”

The door was closed and I was waitin’ for the door to open and a muhfucka to kill me. At one point I even laughed, ‘like, damn, I’m goin out like this?!’” Frightened, he left the car. “Bout 10 minutes later, I swear to God, I woke up and I was laying down in a ditch.” What? “In a ditch!,” he says. “I’m in a muhfuckin’ ditch! I’m lookin around for people who see me gettin’ up off the ground. I sat back in the car and I said, ‘This is it, man.’ I heard a car burning rubber and then BOOM. I was back. I was myself.”

Can you imagine pulling into Applebee’s for some Bourbon Street Shrimp only to find one of the most influential players in NBA history emerge from a ditch, dazed and confused, after getting denied entry into a dive bar?

Read the whole profile over at GQ.