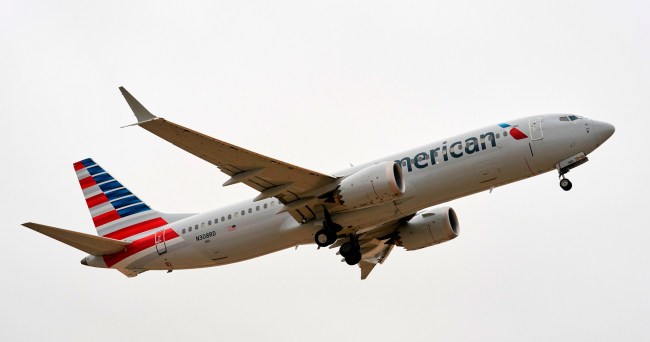 Around 2 p.m. ET on Sunday, the pilot of American Airlines flight 2292 en route from Cincinnati to Phoenix asked over the radio, “Do you have any targets up here? We just had something go right over the top of us.”

The transmission continued, “I hate to say this but it looked like a long cylindrical object that almost looked like a cruise missile type of thing moving really fast. It went right over the top of us.”

When asked to comment on the audio transmission, American Airlines verified that it was indeed real, and that all questions should be directed to the FBI, according to The Drive.

“Following a debrief with our Flight Crew and additional information received, we can confirm this radio transmission was from American Airlines Flight 2292 on Feb. 21,” American said in a statement. “For any additional questions on this, we encourage you to reach out to the FBI.”

The Federal Aviation Administration (FAA) also issued a statement that read, “A pilot reported seeing an object over New Mexico shortly after noon local time on Sunday, Feb. 21, 2021. FAA air traffic controllers did not see any object in the area on their radarscopes.”

There had been some speculation, and rightfully so, that what the pilots may have seen was a Learjet 60 that passed at an angle in front of and above Flight 2292 during this portion of its flight. One major issue with this theory was that this occurred about nine minutes before the radio call was supposedly made. In addition, the Learjet was traveling 5,000 feet above the Airbus and passed in front of it at an angle about eight miles in distance. This is not something out of the ordinary that the pilots should have reacted to in such a puzzled fashion.

Mick, I think it is a totally valid question. These are my thoughts:
1.) Passed 8 miles away/4k above. Nothing unusual.
2.) Talked to a few pilots, they can't imagine these guys would mistake a Learjet doing something they see all the time to the point of making that call.
1/X

All that being said, this could turn out to be a case of misidentification with a number of contributing factors. Absolutely! Hopefully, we will get the whole picture very soon. FAA is key here. Awaiting another update on situation.

FBI spokesperson Frank Fisher told TMZ when asked, the agency is “aware of the reported incident.”

Fisher added, “While our policy is to neither confirm nor deny investigations, the FBI works continuously with our federal, state, local, and tribal partners to share intelligence and protect the public.”

According to Scott Stearns, public affairs chief of White Sands Missile Range, no tests had been conducted on that date and the plane had been 400 miles away.

“We have no idea what it could have been or if anything similar has been sighted in that area before,” said Stearns.

Hmmm… So everyone is basically claiming the pilot and his crew have no idea what they are talking about?