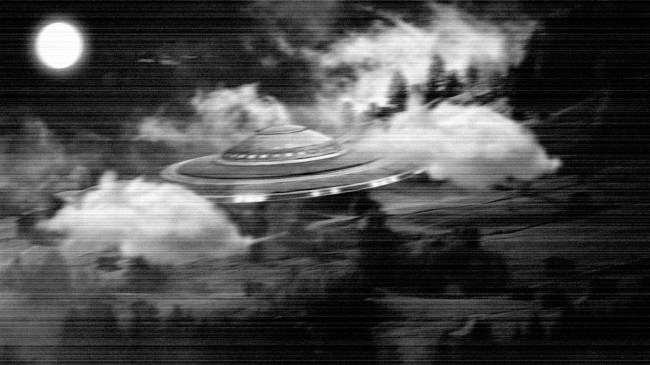 As if we need more proof regarding the existence of aliens (we really don’t – there are over a quadrillion UFOs in space, don’t you know?), now we’ve got UFOs showing up in the background of live French television broadcasts.

The mysterious UFO sighting occurred this past week during a news segment on RT France.

As the news anchor was speaking to Russian correspondent Vera Gaufman in Moscow, a UFO was spotted flying across the screen in the background before vanishing.

We are not alone in the universe. Look at the right frame. They want to be seen. Credit: RT France. #UFO #OVNI #Aliens #ETs #Ebens #Anomaly #IBelieve 🛸👽 pic.twitter.com/mBsU28Mnfh

Prominent UFO and alien expert Scott Waring was among those who viewed the footage and provided the following analysis on his website.

If you watch this RT News broadcast, you will notice two dark oval objects fly past. The objects seem to be flying so close they are almost stacked one upon the other.

They are moving incredibly fast and I put it into slow motion at the end of the video to see them better.

Sorry, no sound, only 15 seconds of no sound, and I didn’t want to add cometary [sic] for that short of a section. But honestly, it looks like aliens are trying to show up on the news.

Ever since Obama was sworn in at the National monument where CNN was broadcasting and they noticed an incredibly small and fast object shoot past behind them…more and more news casts are getting UFOs flying in the backgrounds…not by accident, but on purpose to expose the public to the truth slowly.

It seems aliens are taking serous steps at getting caught in the news live broadcasts.

He’s not lying. Last August, a strange UFO was caught on camera in the sky near Area 51 during a NBC News broadcast.

Take a look at the UFO sighting on the RT France news broadcast below and see what you think.

YouTube channel The Hidden Underbelly 2.0 also commented on the video, saying, “You can see this object fly right past her head and over to her left shoulder.

“This thing looks like it could be two objects, it could be a barbell. But I can’t make out what it is. It doesn’t look like a conventional drone.”

One commenter on that video added, “It looks like what has been described as a ‘rod’. The interesting thing is that the object doesn’t exit the other side of her head as you would expect if it continued on the same linear trajectory.”

Regardless of what this UFO turns out to be, one thing is for certain…

More recent UFO and alien news and evidence…
• Harvard’s top astronomer claims there are over a quadrillion UFOs in space
• 2 million pages of CIA declassified ‘Black Vault’ documents about UFOs now available online
• New Area 51 images taken by pilot show strange triangular object inside an open hangar
• Harvard astrophysicist says alien tech visited Earth in 2017 – and it’s just the beginning
• Astronomers track source of mysterious radio signals to a location within our galaxy
• NASA announces water has been discovered on the moon, bringing us one step closer to proof of alien existence
• Former Senate Majority Leader Harry Reid reveals ‘UFOs interfered with U.S. nuclear program’ in new documentary
• Three lakes found beneath surface of Mars could be home to alien life on the red planet
• Japanese defense minister issues official protocols to military for UFO encounters; do they know something?
• Signs of life found on Venus? Alien bio-signature discovered by astronomers on Earth’s ‘twin’
• New study says microscopic aliens may have been visiting Earth, and multiplying, for centuries
• New study suggests interstellar space rock Oumuamua ‘could have been sent by aliens’
• Landmark new research claims evidence of alien life may exist under ancient ice sheets on Mars
• Ex-Pentagon UFO program astrophysicist admits examining ‘vehicles not made on this earth’