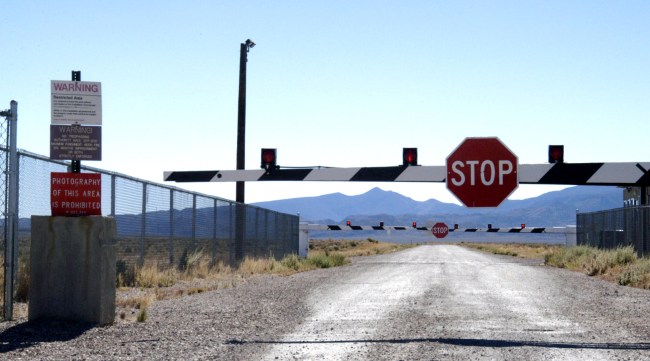 Private pilot Gabe Zeifman is well known for attempting, and in most cases succeeding to snap photographs of the secretive United States military installation best known to civilians as Area 51.

Area 51, located at the Nellis Air Force Base Complex and officially named the Nevada Test and Training Range (NTTR), was photographed by Zeifman on Christmas Day 2020 and one picture in particular has piqued people’s interest.

Zeifman, flying his Cessna 150, captured an interesting photo of one of Area 51’s elongated hangar-like structures, also known as a scoot-and-hide shelter, in which appears an unusual-looking triangular object or structure.

According to The War Zone…

The shelter in question at Area 51, which measures 120-feet wide by 320-feet long, and has been identified in the past as Hangar 19, is situated along a taxiway that connects the base’s main ramp area with its long-closed and extremely lengthy original runway. The taxiway continues on to the new active runway to the east.

A hangar had existed at this location for years, seemingly back to the 1980s, but by around 2005, substantial additions were made to its north and south ends, effectively tripling its covered length.

The next year, wall-like structures were added to either side of the expanded facility, the extensions of which are open on their lower sides.

This walled configuration would further block the view of what was going on there not only from the main apron and the main runway, but from prying eyes on Tikaboo Peak a couple of dozen miles away.

Authors Tyler Rogoway and Joseph Trevithick also point out, “The structure is not really just a hangar in the traditional sense. Scoot-and-hide shelters help conceal flying test articles from prying eyes, most notably from satellites above. This also provides a site closer to the runway where personnel can perform last-chance checks and troubleshooting, as well as arming any explosives, while the aircraft remains concealed.”

While they don’t come right out and say that the object in question is alien in nature, they do write, “although its odd shape is intriguing, which shouldn’t be surprising, as most things that fly out of Groom under a secretive test regime look alien, at least historically speaking.”

If the object is not extraterrestrial, the authors did make some guesses for what it might actually be including a Martin Marietta X-24B lifting body, a X-24C / L-301, or a F-22-sized hypersonic demonstrator such as the SR-72 concept.

Regardless of what the object inside the Area 51 shelter ends up actually being, the authors finally and very accurately state, “we may never find out if an aircraft that matches the odd description of what we are seeing in the photos above ever even existed at all.”