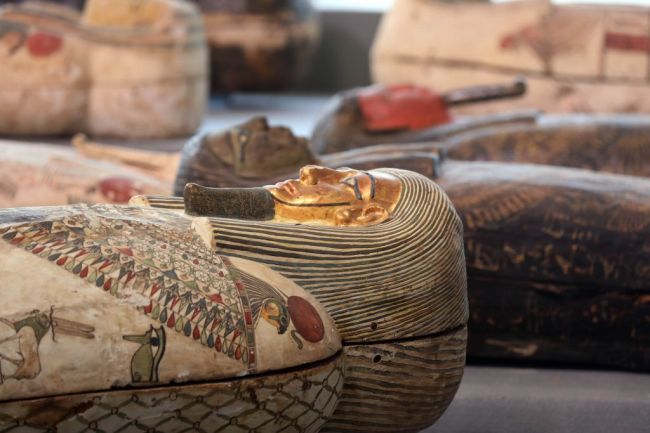 Archaeologists are testing fate after opening coffins from an ancient Egyptian graveyard last week. Now, we wait for whatever evil spirit that is summoned from the sarcophagi who will bring plagues and whatever wickedness our way for encroaching on a sacred burial ground in Saqqara, Egypt.

On Saturday, more than 100 sarcophagi were exhumed from three burial shafts that were 40 feet deep in the Saqqara necropolis located south of the capital of Cairo. This is in addition to the 59 sarcophagi discovered last month in the same burial grounds. From that group, 13 mummy coffins that are believed to be over 2,500-years-old were opened.

Egyptian archaeologists opened a sarcophagus, and inside was a well-preserved mummy wrapped in burial shroud with hieroglyphic pictorials. They performed a CT scan on one of the mummies, and concluded that the person had died in his 40s, adding that he didn’t suffer any chronic diseases.

They also used x-ray equipment to peer inside the primitive coffins. The sealed sarcophagi from the Late Period and Ptolemaic periods of ancient Egypt include mummies and statues of priests and high-ranking officials, such as a judge of the 6th dynasty, according to Mostafa Waziri, secretary-general of Egypt’s Supreme Council of Antiquities.

“It’s the biggest discovery of 2020, but we are not stopping here yet. The discovery of one burial shaft leads to another,” antiquities minister Khaled El-Anany told reporters at the unveiling ceremony. “Saqqara hasn’t yet revealed one percent of its secrets. We can find tombs and burial shafts in every single spot in this area.”

The antiquities minister promised more artifacts are on the way, “Saqqara has yet to reveal all of its contents. It is a treasure. Excavations are still underway. Whenever we empty a burial shaft of sarcophagi, we find an entrance to another.”

Saqqara is home to 13 pyramids, including the Step pyramid of Djoser, which is estimated to be the oldest stone structure of its size in the world. Saqqara is in the ancient Egyptian capital of Memphis, a UNESCO World Heritage Site, which includes the famed Giza Pyramids.

Egypt hopes the discoveries of the sarcophagi will help boost its tourism industry that has been devasted by the COVID-19 pandemic.

Let’s just hope that the archaeologists did not read from the book.