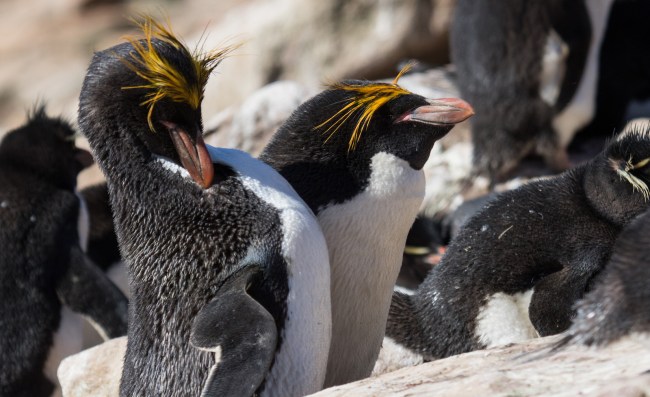 Monogamy is a funny thing.

The divorce rate for Millennials has been cut dramatically because we’re waiting longer to get married and start the more intense part of our lives where other people depend on us, rather than sleeping until 1 or walk of priding it from some random walk-up on the east side of town.

In your defense, it seemed like a decent idea after that flight of tequila shots!

Whatever your thoughts on monogamy now with the ease and influx of dating apps introducing you to a full and varied pool of people (that you’ll probably go out with for a happy hour drink and never see again), mating for life has become a choice rather than a necessity.

It’s more about love and less about survival, thanks to modern technology and free two-day shipping, allowing us to make an unprecedented number of decisions based on wants rather than needs.

However, a lot of members of the animal kingdom still (smartly) mate for life.

Whether it’s because they feel the same trepidation and annoyance over having to meet strangers and potentially deal with rejection and STDs, or they just need to protect their family unit, here are the ride or die partners of the animal world.

Roughly 90% of birds mate for life, but no species is prouder of that fact than macaroni penguins.

They get so jazzed when they see each other they do their own penguin dance, and once the babies are born, the mom goes out to look for food while dad watches the chicks.

And unlike many of the penguin’s male contemporaries, he sure as hell would not call looking after his own child, “babysitting.”

Surprise—lone wolf symbolism, complete with all its cheesy graphic tees, is all a pack of lies!

Most wolves form a family unit, and alpha males share dominance within their respective packs until it’s mating season.

Then the alpha female is in charge.

Albatross learn from a young age how to keep the romance alive and entice potential mates through a series of ‘dance moves’ that includes preening, pointing, and other masterful showcases of affection.

They try out these moves on a series of potential partners until one is attracted enough to chill with them for life.

Seahorses flirt with each other by intertwining tails and dancing around each other, and female seahorses can get pissy with one another and will compete for certain males (been there, honey).

After the seahorses pair off with one another, male seahorses carry their babies in a pouch in their stomachs until they give birth.

In related news, I want to be a seahorse in my next life.

Like many of our exes, swans can be exceptionally pretty and glamorous, only to reveal themselves to be extremely territorial and rude.

Rather than try to date around, the bitchy birds form monogamous pair bonds that can last for years at a time, and sometimes even life.

Evolutionarily speaking, gibbons are the closest to humans when it comes to choosing an appropriate partner and riding it out.

They’re also known to occasionally cheat on their partner within the group, but they overall try to tend to stick to the one they’re with.

AND WOULDN’T THAT BE A GREAT IDEA, BRAD?

These lovers pair up when they’re younger and do EVERYTHING with their partner for the rest of their lives.

French Angelfish cohabitate, travel, and defend themselves against other fish pairs.

Just like “The Twelve Days of Christmas” suggests, these birds come in twos.

The birds mate for life and are annoyingly cute about it.

I have some bad news—termite colonies are literally just a mom, dad, and THOUSANDS of their offspring.

We usually hear of ants or bees where the queen mates with a bunch of males like the hottest Instagrammer on spring break, but termite queens mate with their termite king for their entire lifespan.

Most rodents aren’t monogamous, but the prairie vole are ready to take the plunge.

They form lifelong bonds and support and protect each other through the various trials of rodent life.

HONORABLE MENTION: While researching this piece, I was surprised to find that lobsters aren’t on this list.

Much like the pastel-wearing Chads that consume them nearly exclusively over the summer months, dominant male lobsters mate with an entire harem of lobster chicks and have serial flings that last about two weeks.

Order Sarah Solomon’s “Guac Is Extra But So Am I: The Reluctant Adult’s Handbook” through Amazon here, or anywhere books are sold.