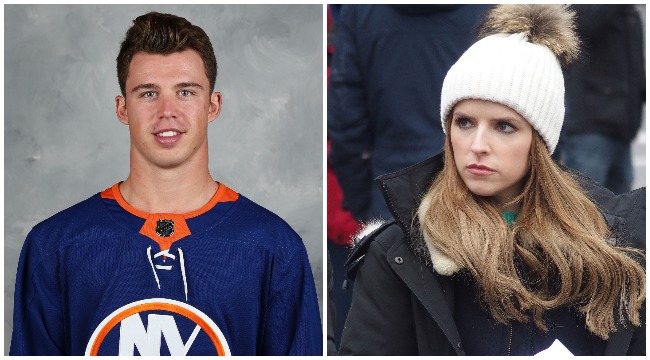 The day after a high school me saw The Girl Next Door in 2004, I locked myself in my parents basement and penned a love letter to actress Elisha Cuthbert. Must’ve been no less than 1,000 words–600 declaring Elisha the most attractive woman I’ve ever seen, 200 attempting to demonstrate my wit and charisma, and 200 admitting that if my classmates found out about the letter, I’d be forced to cut my underwear before school so the wedgies would be less painful.

The pain of the wedgies would surely be less intense than the fact that Elisha never responded.

I would later find out that she had been engaged to another man, before breaking it off an eventually settling down with NHL guy Dion Phaneuf. NHL guy or pothead blogger. It must’ve been an impossible decision for her.

I’ve since learned to leave the shot-shooting to esteemed gentlemen who actually have a shot at success and who haven’t been wearing the same underwear since Bush was in office.

The 22-year-old Islanders forward has been feeling himself since having a stellar season thus far (22 points in 35 games) for an Islanders team with the third-best record in the league (23-9-3).

This, my friends, is what we call in the industry a ‘HEAT CHECK.’

Former Islanders defensemen Bruno Gervais made an attempt to push his buddy over the finish line.

Remember Beau when you saved me from a burning building, cooked me a 7 course meal and taught me 8 languages , that was a great day

Twitter folks, who mainly jump on the opportunity to call a stranger a c*nt, banded together to try to make this unlikely union a reality.

Thanks for performing open heart surgery on me man, I appreciate it

hey man thanks for letting me use your gear during that fundraiser you held for the animal shelter to save puppies. Your cup was way too big but other than that everything worked fine. Thanks again!

thanks for lending me the private yacht to go for a family vacation to the bahamas last saturday !! and for letting me use your helicopter to frequently visit my dying grandma !!

Waited five years for a donor until this guy gave me his kidney. Can’t thank you enough dude

Beau, thank you again for saving all those kittens at that animal shelter in the Bahamas when the Hurricane hit. Still amazed that you swam to Miami with them on your back.

Hey @titobeauvi21, Danny DeVito told me to tell you thanks for being the inspiration for this scene. pic.twitter.com/t9badFVDcO

At the time of this writing, Anna has yet to respond. Chin up, Anthony. I’ve been there, bro.

These replies have been my entertainment for the last two days. Thank you all for regaling me with the true tales of this man’s heroism.