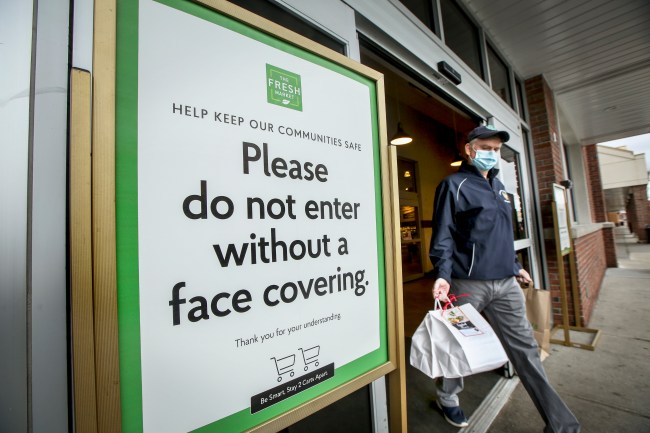 Today, after watching the clip you’re about to watch, I called my father and told him I loved him.

I said I’m sorry I overreacted when he insisted on chaperoning the 8th grade dance and pumped his dad fists at Baha Men’s 2000 smash hit Who Let The Dogs Out. It took 20 years to admit he was not the reason I faked a stomach ache and hid in the bathroom during Stairway To Heaven while Bobby Sorrentino danced cheek-to-cheek with Stephanie Jacobson, but it was merely overwhelming adolescent insecurity exacerbated by a nickel-sized forehead pimple.

I hope that after watching this Tucson, Arizona father throw a temper tantrum in a supermarket because safety is for sissies, you too will acquire a newfound respect for your pops.

Anti-masker in Tucson, AZ throws a tantrum and has to be carried out by his own son pic.twitter.com/ggo4I968aL

First, let’s address the elephant in the room. It appears someone soiled themselves at the 36-second mark.

As easy as it is to mock this looney toon, I wish God gifted me half the blind confidence to call someone a beta while being hauled out of a supermarket by my teenage son like a female contestant greeting The Bachelor for their first one-on-one. Sadly, irrational conviction is rewarded in this society, it’s why Alex Jones lives in a mansion in Austin and I live in a one-bedroom in Boston with lazy plumbing and no natural light.

What could be more manly than yelling f****** p**** at someone trying to do their job as your son picks you up and carries you out of a store? Sure beats wearing a mask, amirite?

The best time to tell you dad you love him is now, folks.