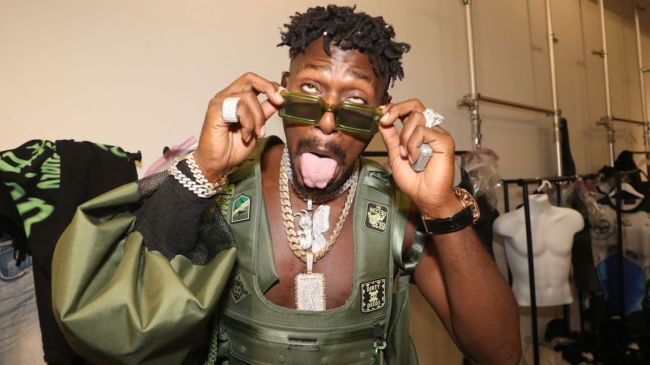 Former National Football League diva and perpetual menace Antonio Brown made tons of headlines over the weekend after the New York Post obtained video of him exposing himself in a Dubai public pool back in May.

The video, despite how predictably shocking Brown has become, was still undeniably jarring to watch as the nude brown not only exposed his private parts but was tossing around a woman that he “just met”, according to the original report from the New York Post.

Then, just a few days later, Brown’s buddy,  Donda Sports boss, and partner-in-chaos Kanye West made headlines with his similar attention-seeking behavior as he wore a shirt that said “White Lives Matter” to his YZY show at Paris Fashion Week.

Naturally, Brown — who is the “president” of West’s Donda Sports Agency — chimed in about West’s shirt on Instagram and obviously backed his fellow loose cannon.

Brown, the free agent NFL wide receiver who took off his jersey and pads in the middle of the Tampa Bay Buccaneers’ game against the New York Jets in January and left the field, posted a video on Instagram showing him and West working on a hip-hop song collaboration.

“All Lives Matter,” Brown wrote in the caption. On Brown’s Instagram Stories, he added: “@kanywest, we always got the plan. Change gon come. Trust.” [via Fox News]

Earlier this week, after the pool video went viral, the 34-year-old suspected CTE sufferer appeared to address the incident on social media and didn’t appear to show any remorse or regret.

As for why Kanye designed the White Lives Matter shirt, he said it’s because Black Lives Matter is a “scam” and that it’s “over now.” West has also declared on his Instagram that “Black academics are on his side” when it comes to this topic.

RELATED: Society Is Genuinely Perplexed As To How Antonio Brown Isn’t In Jail, Especially Considering He Exposed Himself In Dubai Of All Places