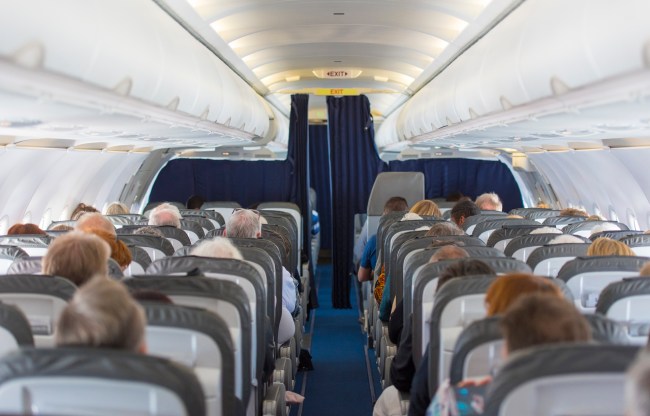 One woman found herself in the middle of an ant infestation at the worst possible time — at 35,000-feet in the air during an hours-long international flight. She shared the chaos on Twitter.

Charlotte Burns was traveling from Venice, Italy, to Newark, New Jersey, this week when the unthinkable happened. Apparently, an army of “large, fat ants” swarmed the plane’s cabin. Mind you, the United Airlines flight from Venice to Newark is nine hours and 30 minutes. NINE HOURS OF ANTS EVERYWHERE!

One over here, between the seats. I tell the staff: they ask if I can wait until after the plane takes off? We're taxiing. Umm, ok, sure.

The nice lady is talking to me and pouring a drink when she shudders: she's seen an ant, marching across the top of the seat in front. She calls her senior colleague. This is becoming *disruptive* (and in the old-fashioned way before tech people coopted the term)

Until: all of a sudden. I mind. I mind very much. Here's another bugger dashing—absolutely tearing it!—across the armrest. Where is this ant going? To an ant party? An ant union meeting about bad travel conditions?

Me and the middle aisle guy are standing up like we are the ant enforcers while the senior cabin crew guy rocks up, armed with… a flashlight and a wet cloth. Sure, ant-mageddon might be undone with a lemony rag, why not.

Someone definitely spilled a box of donuts on the plane, which as everyone knows, is how you get ants.

Cabin guy comes back: he's wiped it all down and saw one more in the window-well. The WINDOW? This means the ants are expanding their march. I suspect the lemony cloth hasn't quite been our Excalibur.

WAKE HIM UP, me and middle aisle guy gently suggest

What is this? A plane for ants?

The cabin guy does the flashlight thing again in the overhead locker and says, I can't see anything. Me and middle aisle guy say please take the bags out and check beneath. He does. ANTS! Ants lie beneath.

This is where things start to get more inept. They open the suitcase ON THE SEAT! why? Ants running everywhere and guy in front is using his hands as little tweezers, picking them off one by one. Cabin guy is using sterile lemon wipes.

Charlotte got bit by one of the angry ants on the transatlantic flight.

On the plane from Venice to New York when a large, fat ant walks over my pillow. Hmmm. That's odd.

Once she returned home, Burns wasn’t taking any chances. She put her luggage in a Zapp bag, which kills bugs.

I’m home and not taking any chances: the suitcase is going in the Zapp Bug oven which is a) a real thing b) like a large pizza bag but to overheat bugs not good and c) is the best way to kill bugs and we just happened to have it because of bed bugs. pic.twitter.com/Na6ZZj9wDQ

United Airlines issued a statement about the buggy flight. “We are concerned by the experience a customer reported on United flight 169 from Venice to Newark,” United Airline said in a statement. “We had been in contact with the crew during the flight, where they advised the ants were isolated from a customer’s bag in the overhead bin and was contained to a limited area of the cabin.”

“The airplane landed at Newark this afternoon and has been taken out of service for extermination,” United said. “We followed proper protocol by notifying customs, immigration, as well as agriculture of the issue.”

Great, now someone is going to bring their emotional support anteater on their next flight to deal with the terror of having a plane full of ants.

Maybe we should all welcome our new insect overlords.