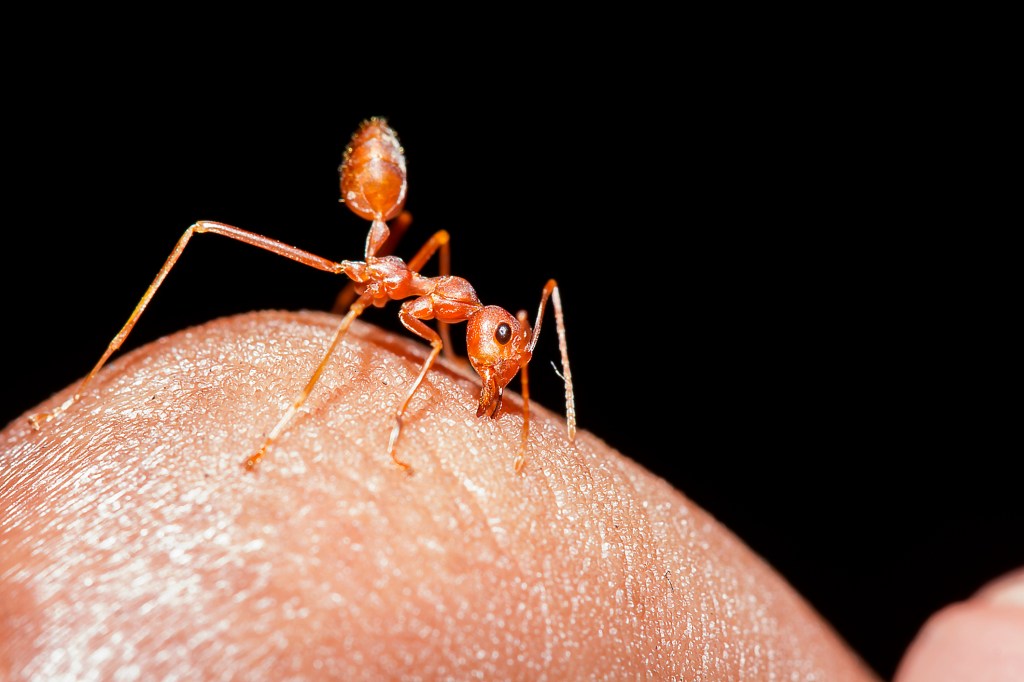 There is a bizarre, irritating phenomenon that plagues the sweaty beast. It is one with the power to turn even the most civilized specimen of a well-groomed man into a wild freaking animal. If it strikes, a guy will excessively scratch himself anywhere he can, even in public, in a quest for some semblance of relief. We imagine there have been droves of dudes smacked, knocked out, and even dragged to jail for such behavior, all because they couldn’t bear a single second more of this blight below the waist.

No, it’s not the crabs. We’re talking about jock itch here, boys. A fungus that unexpectedly erupts on our groins, turns them beet red and causes us to act as though we were birthed in the woods and now live with ants in our pants.

If we could only be so lucky.

Scientific minds now believe that ants could scratch the itch for us poor bastards afflicted with the fungus among us. A recent study published in the journal ACS Central Science shows that certain types of ants, known as Attine, could help develop anti-fungal drugs that could save lives.

Wait, so does this mean there’s a possibility that a case of jock itch could be terminal? Well, not exactly.

There are somewhere around 200 species of Attine ants that have evolved all over South and Central America in the past 50 million years. While all of these ant colonies cultivate fungus, the antibacterial properties used to protect their crops seem to differ from region to region. So researchers set out to see if there were any unsung bacteria that previous investigations may have overlooked.

For this study, researchers locked in on various ant nests across Brazil. What they found was that nearly two-thirds of the Pseudonocardia strain contained a super anti-fungal known as attinimicin. It was a strange find, researchers said, as they had never seen this bacteria produced in this manner before. “This discovery marked the first report of a specialized metabolite with broad geographic distribution produced by ant-associated bacteria,” according to Science Daily.

The fungus was deadly against fungal parasites. Scientists now believe the discovery could eventually lead to drugs that treat serious fungal infections. It turns out that it’s actually quite rare to discover new anti-fungal agents like this one. Unfortunately, “it is an uphill climb to get anything into the clinic,” Helfrich said. So, miracle ant medicine isn’t anything we should expect soon.

But what about this terminal jock itch that you mentioned earlier? Okay, first of all, jock itch isn’t deadly. It’s annoying as hell, but it’s not going to kill you. Furthermore, you don’t need ants to get rid of it either. We live in a society where you can walk down to your local CVS or Walgreens and pick up any variety of over the counter anti-fungal creams and start feeling better. Scientists hope to use ant colony bacteria to treat or cure more invasive fungal infections, not diaper rash. They’re not too worried about getting men to stop scratching their balls.

That’s a lost cause.

So while ants may not save the sweaty beast from jock itch, they may help rid us from some pretty gnarly diseases in the future. Those of you worried about scratching a hole in your scrotum should always remember to shower after workouts. Bacteria breeds on our bodies like rabbits in those kinds of soggy conditions. As for the rest of you, be careful where you step from here on out.

After all, the ant you stomp on today might have saved your ass down the line.