Liver Quivers: Your Excessive Apocalypse Drinking Might Bend You Over Later 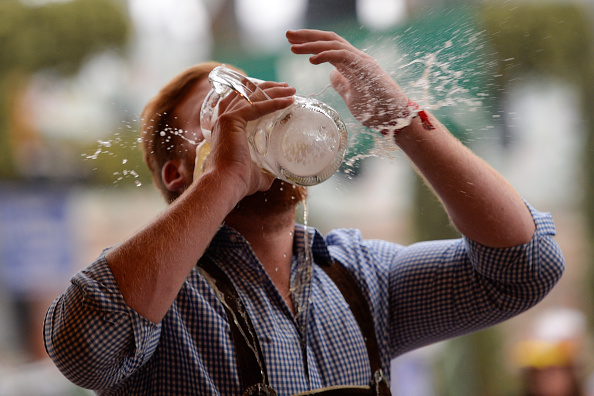 “The only thing more dangerous than this bug is not having any booze in the house.” – A Wise Man

America is now on an unanticipated vacation from, well, just about everything. It’s one that the orange buffoon taking up space in the White House is now saying could have us all on lockdown until the end of August. Ugh! Well, boys, might as well stop using the downtime to polish up all of those bikes and boats. As much as it pains me to say it, we might be headed into a lost Summer.

It’s a twisted ordeal that started off as all fun and games for parts of the population. I mean, who doesn’t want some paid time off from the grind while the government scrambles around trying to kill a microscopic alien? But now that most of the country has been cooped up for weeks without much or any social interaction, all while watching their investments and savings dwindle to zilch, many folks are desperate for a reprieve, and it’s making them thirstier by the minute.

In the true spirit of self-medicating, most of America has turned to booze to deal with the boredom, depression and despair that comes with having no money, no life, and, as sad as it may be, no hope. They figure, hell, why not get shit-faced now before the castrated economy has us moving into a cardboard box in a matter of months. Let’s drunkenly relish in what is left of civil society before we are reduced to street dwellers, scavengers, and cannibals. Pro Tip: Learn how to properly butcher, store and prepare your fellow man now while we still have the Internet.

It’s beginning to look as though the good old days have come and gone. We are now living in our wasted years. Perhaps this explains why the alcohol industry is the only business sector out there making a living. It has experienced a 75% increase in overall sales since the nation was driven inside like refugees. The trend is expected to continue its upward momentum, at least until everyone goes completely broke and can no longer afford anything but black market toilet hooch.

Still, all of the day drinking the nation is presently engaging in, the evening cocktail hours and other dastardly wino behavior could be dragging the nation into yet another health crisis very soon.

Long before some nasty bug snuck into the country and started gnawing away at the lungs of the American citizen, health officials were already warning of a savage increase in liver disease. What’s really fucked up about it is a lot of these cases were not old-time boozehounds that had been reduced to drinking rubbing alcohol just to get by. Not at all. A hefty percentage of the people who were getting strapped to life support as a result of alcohol-induced cirrhosis was millennials between the ages of 25 and 34. A recent study shows there really is no end in sight to the nation’s crusty liver. A lot of this increase has been attributed to economic downturn, whereby people just have a tendency to drink more during hard times. Well, we’ve got more of that right now than we can handle. Somewhere around 16 million people have lost their jobs in the past few weeks.

If we survive this demon bug presently beating the nation like a one-legged stepchild, allowing us to get back to some level of normalcy in the months to come, it is conceivable that we could start seeing more liver disease fester to the surface. We’ve already heard that no amount of booze should be considered safe, that every drop is just one step further to the grave. U.S. health officials with the CDC are a little more forgiving. They say that men can consume around two alcoholic drinks per day without running the risk of too many health issues while women can have one. But if more of the country is now throwing caution to the wind and getting somewhere between buzzed and piss-pants hammered every single day, well, that could spell trouble.

But what’s a person to do? Spend all day in the house, sober as a judge while worrying about how they are going to pay the bills or salvage a business? Huh, we can try, I guess. But it’s like the proverb goes: “The road to hell is paved with good intentions.” Americans need specific wheels on the mighty machine to keep moving to have some semblance of faith in the idea that everything is going to work out for the best. And right now, there’s no indication that those will start spinning again anytime soon. So we drink to remember the good times, drink to forget the bad, and drink to keep from dwelling too much on the uncertainty of our future. It’s terrifying, no doubt.

The only solace that can be offered during this tumultuous time is that the liver doesn’t go down without a fight. It’s a three-pound organ designed to process all of the atrocities we pump into our bodies. And while it does, in fact, have its limits, health experts say it can take a beating.

“The liver’s a resilient organ. It’ll heal itself. It’s one of the few types of tissues of the body that can heal itself,” said Dr. Gyongyi Szabo, a physician-scientist and chief academic officer at Beth Israel Deaconess Medical Center in Boston. “But if somebody has an ongoing daily insult for many years, and usually it’s decades, the pattern of scar that’s laid down is what subsequently leads to problems.”

If you experience symptoms like jaundice (yellowing of the skin or eyes), fatigue, fever, or stomach pain, it might be time to give the bottle a break. But remember, since those summertime activities could be few and far between this year, that yellow may be as close to tan as you get.