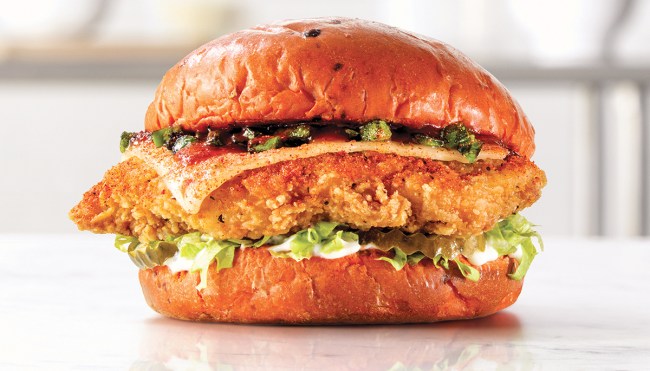 Like many people, I’m a big fan of kicking my food up a notch by throwing some hot sauce on top (if anyone on the Frank’s Red Hot team is looking for an aspiring influencer who genuinely puts that s—t on everything, feel free to hit me up).

However, I’ve never really been a fan of painfully spicy options with names like “Atomic Colonoscopy” and “The Eruption of Mt. Vesuvanus” that attract the kind of eaters who have apparently run out of any other options when it comes to feeling alive.

However, if you’re into that kind of culinary self-flagellation, then I’m thrilled to inform you that Arby’s has arrived with a couple of new sandwiches that’ll likely be right up your alley. On Monday, the fast food chain announced the arrival of the “Diablo Dare” in the form of a new spicy chicken sandwich (as well as a brisket option) designed to test the mettle of particularly adventurous diners.

The new offerings feature five fiery elements, including Pepper Jack cheese made with ghost peppers, a bun infused with chili flakes, and the signature Diablo BBQ sauce that harnesses a quartet of spicy chiles.

As any seasoned viewer of Hot Ones or Man v. Food knows, there’s no better way to combat the heat than with the help of some dairy, and Arby’s is providing anyone who orders either sandwich with a contingency plan thanks to the free vanilla milkshake that comes with every order.

If you’re interested in accepting the dare, you can snag one at Arby’s locations across the United States until February 6th.