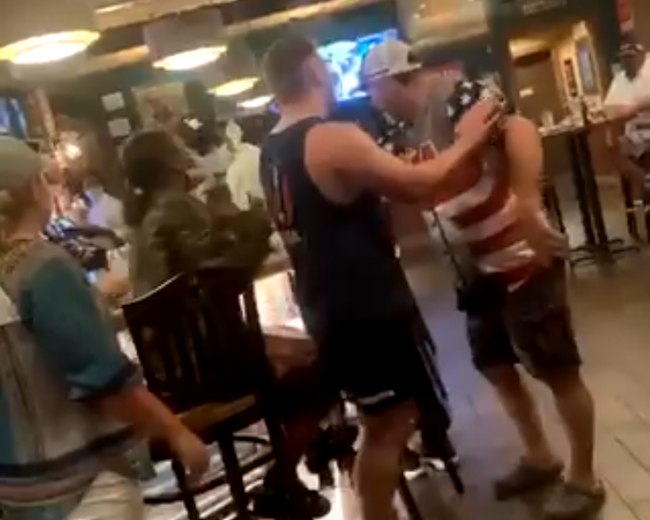 Did you have plans to hit a local bar this fourth of July weekend?

You might want to just drink in the backyard because going out to the local water hole seems like a dangerous proposition these days for many reasons.

The place will be packed with people who care or don’t care about social distancing, there’s a chance you could pick up Covid-19 with your meal, and there’s always the possibility of catching friendly fire from other people losing their minds over the correct way to social distance.

The melee in this Arkansas bar is a good example of all of the above.

KARK 4 News got the lowdown from Seth Crews, the guy who caught the entire altercation on his phone.

Crews and his brother were having dinner at the Saltgrass Steak House in Little Rock, Arkansas on Saturday night when things went wrong real quick.

“All the restaurant employees were trying to help, they were just in shock like the rest of us,” Crews told KARK 4.

The issue stemmed when the woman – seated in the video and wearing a face mask – confronted maskless customers standing too close to her.

According to the police report obtained by KARK 4, a restaurant employee saw the maskless woman purposely coughed on other customers.

The cougher’s boyfriend or husband gets involved – and OF COURSE he’s wearing American flag gear – and confronts the woman in the mask, which causes her boyfriend to stand up, grab a glass, and then it’s fight night in America.

“Looks like there’s gonna be a brawl. You playin’ something good?”

Here’s video footage of the altercation. Warning – curse words are involved, along with the wasting of a perfectly good drink.

WATCH: Saturday night dinner at Saltgrass Steakhouse in Little Rock turned violent after one customer was upset about the lack of social distancing.
Hear from someone who saw it all go down tonight on @KARK4News and @FOX16News
Warning: profanity is used. pic.twitter.com/wsez397453

According to KARK 4 News, no one involved in the scuffle was arrested, and no charges were filed by anyone involved.