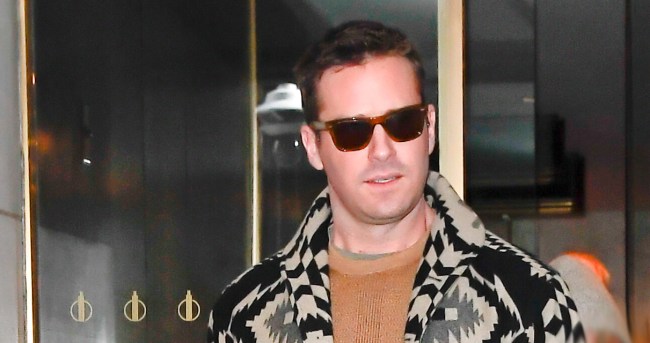 The Armie Hammer saga just took another troubling twist as his ex-girlfriend Paige Lorenze just shared some disturbing Instagram messages she received. from the actor.

Lorenze, 22, shared a screenshot of Instagram direct messages she claims were from Hammer, in which he graphically detailed how he wanted to control her.

“You are perfect. Don’t be embarrassed by anything,” the message reads. “You feel f–king incredible and the way you fell perfectly in to a submissive space was beautiful.

“In order to do that I’m going to have to f–k you in the a–. I need to f–k every one of your holes to fully take you.”

@ anyone saying I wasn’t manipulated and love crying victim. pic.twitter.com/nqHdCYx2ty

“These latest messages are just further evidence of the reality of his dangerous proclivities and his reaction shows his blatant disregard for the women he has traumatized,” Lorenze told Page Six in a statement.

Lorenze revealing these alleged direct messages from Hammer follows Lorenze’s previous statements about alleged abuse and manipulation including Hammer carving the letter “A” into her body.

There have also been other claims made by women, including one former girlfriend of Hammer who claimed he said he wanted to “barbecue and eat her.”

She also had previously shared other alleged messages from Hammer sharing photos of her without her permission and discussing how he tied her up.

AH sharing photos of me I didn’t even know existed with people online, without my permission or knowledge. Disgusting, violating and quite frankly unacceptable. pic.twitter.com/CTaIrvHfJr

Daily Mail also recently published texts that are alleged to reveal Hammer complaining about being “kink shamed” as well as some voice notes her recorded.

beyond disgusting. he is so obsessed with the sound of his own voice. https://t.co/r9Jig56BaH

i have TRULY never seen someone so desperately trying to come off as profound, dark and interesting. this is predatory behavior. period.

Hammer, who has been forced to drop out of projects over these claims and others, he denied any of it happened.

Hammer’s estranged wife Elizabeth Chambers wrote on Instagram over the weekend, “For weeks, I’ve been trying to process everything that has transpired.

“I am shocked, heartbroken, and devastated. Heartbreak aside, I am listening, and will continue to listen and educate myself on these delicate matters. I didn’t realize how much I didn’t know,” said Chambers.

“I support any victim of assault or abuse and urge anyone who has experienced this pain to seek the help she or he needs to heal.”