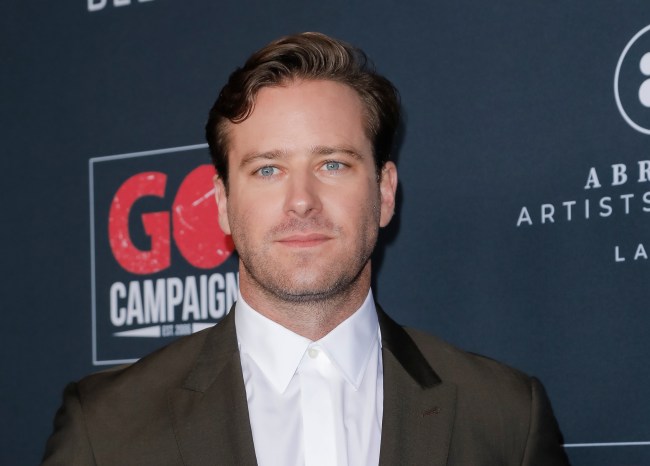 Armie Hammer has left the building. And by building, I mean his house in LA. And by left, I mean he moved everything out… except for the rope-bound mannequin torso, which ended up in trash in such absurd fashion that it feels like he’s playing us:

Armie Hammer quietly vacated the swanky LA home he used to share with his estranged wife, Elizabeth Chambers, “under the cover of night” over the weekend, as a source told Page Six.

But it’s less what “trucks and a gaggle of movers … working well after midnight and lit only by flashlights” took and more what they left that’s drawing eyes to the property today. To wit: what appears to be a female mannequin torso stuffed in the trash.

… and those of you well-versed in Hammer’s eccentricities at this point will recall that one of the hashtags the 34-year-old actor was seen to follow on Instagram was “shibari,” a form of Japanese rope bondage.

Now, you might be thinking, “rope-bound mannequin torso? So what?! Maybe that torso was falling apart. Maybe those ropes are like the strings which hold together portions of beef tenderloin from the butcher, which you sometimes forget to cut off and then a guest eats one and BOY does that ruin the dinner party. The Heimlich Maneuver doesn’t work WHATSOEVER on string.” To that I say…

Where there’s smoke, there’s fire. Where there’s rope, there’s desire. At least, when it comes to Armie Hammer. Is it certain that Armie was using a headless, limbless mannequin to enact whatever bizarro fantasies his mind could conjure? No. But one thing we know for sure is that using a mannequin instead of a human is the safe sex version of… whatever this is. So I’m not exactly sure why we’re coming down on the guy for this.