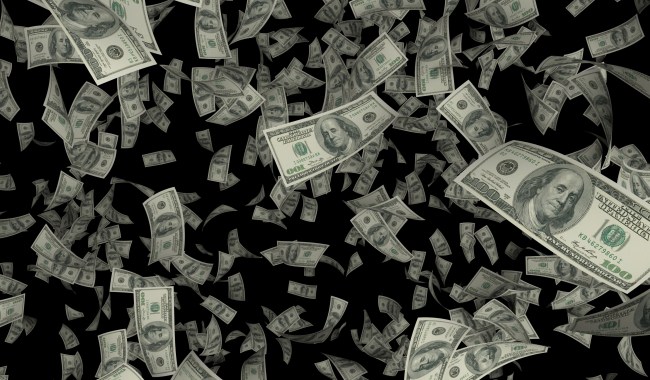 Money may not grow on trees, but occasionally it does appear out of thin air apparently. Especially if you were traveling west on I-285 Tuesday night in Atlanta, Georgia.

That’s because an armored truck that was traveling down that highway unexpectedly had its side door open up, spewing money all over the interstate. Lots of money.

There were so many cars stopped due to people trying to score an extra payday that by the time police made it through the gridlock, everyone who snagged some bucks was gone.

According to the Atlanta Journal-Constitution…

Investigators are still trying to determine the exact amount missing, but [Dunwoody police spokesman Sgt. Robert] Parsons said the truck’s crew estimated it could be in the neighborhood of $175,000. Officers and the crew were only able to collect about $200, mostly in small bills.

All denominations of bills spilled from the truck. “Ones, fives, fifties, you name it, it was in there,” Parsons said.

“The law is the law,” Parsons told AJC.com. “You need to turn in the property. It doesn’t belong to you. Reality needs to kick in, and you need to realize this money belongs to someone.”

He also said that investigators have been studying videos posted on social media to isolate the license plates of people who stopped to scoop up some of the money.

“If you bring the money into Dunwoody Police Department, 24/7, and turn it in, that’s it,” said Parsons. “We’re done. We’re all human beings, we all understand this is something that just doesn’t happen. You’re driving down the interstate and money falls out of the sky.”

People were still stopping at the spot of the cash storm on Wednesday in search of some free money, but a few have actually turned themselves in and returned what they picked up.

Honesty is the best policy. Some people have been returning the money that fell from an armored car on I-285 last night. We salute you for doing the right thing. @DunwoodyPolice #Dunwoody pic.twitter.com/twHRAdtA1l

Realistically though, he knows most of the money will never be recovered.

“Some of it was gone forever the minute it hit the pavement,” he said.

On the plus side, at least no one crashed into anyone trying to get paid.