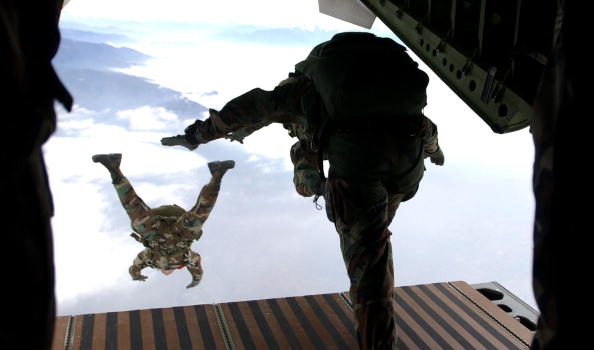 The Green Berets are a special operations force of the U.S. military that utilize their unique skills for unconventional warfare, reconnaissance, fight terrorism, and counter-narcotics. Apparently, two members of the Green Berets don’t understand the meaning of “counter.” Instead of opposing the trafficking of narcotics, two members of the United States Army Special Forces planned to smuggle 90 pounds of cocaine into the U.S. from Colombia. Guys, you’re doing the anti-drug thing all wrong.

Former Master Sgt. Daniel Gould and Sgt. 1st Class Henry Royer planned to smuggle 90 pounds of coke, worth about $1 million on the streets according to federal court documents. The two Green Berets tried to bring the cocaine on a military transport airplane departing from Colombia and traveling to the Eglin Air Force Base in Valparaiso, Florida.

The two men purchased the cocaine from Colombian national Gustavo Pareja, then packed the drugs into a hollowed-out punching bag. The punching bag was loaded onto the military plane at the Bogota Airport. “Suspicion was aroused at the United States Embassy when packages were x-rayed, revealing cocaine within gutted out punching bags,” the Department of Justice said in a statement. Authorities found 40 kilos of coke in the punching bag.

Apparently, this wasn’t the first drug smuggling the two soldiers had done. In early 2018, Royer traveled to Colombia with $9,800 in cash to purchase 22 pounds of coke. During the smuggling trip Royer stayed at Gould’s apartment in Cali, Colombia. They successfully brought that shipment back to Florida and sold it to a distributor. “The defendant and co-defendant Royer then decided to reinvest the money from the first load of cocaine into a second load ― of greater quantity,” according to court documents.

The two soldiers pleaded guilty in mid-December to two federal charges each of conspiracy to traffic cocaine. Gould received an administrative discharge on December 7th. Both men face 10 years to life in prison for each of the counts. Gould is due in court for sentencing on March 12th.