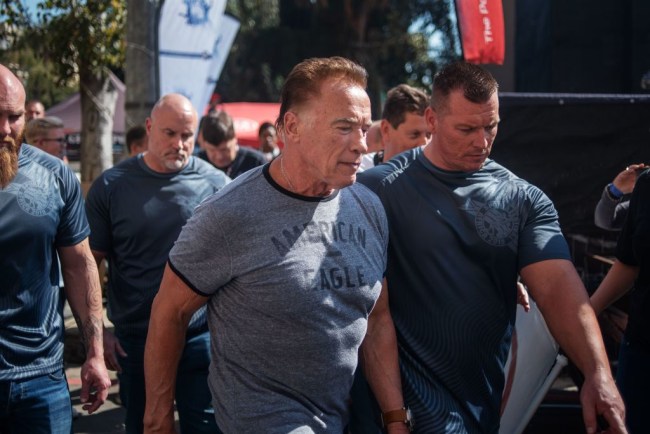 Last month, Arnold Schwarzenegger revealed his tried and true workout routine, his diet that keeps him trim, and his go-to protein shake recipe that sometimes has tequila in it. Now, Arnold is back to disseminate more of his vast gym knowledge on the worst workout mistakes people make.

Arnold was asked what the most annoying things he sees people do at the gym, and he responded: “When they do half a rep, or when they do chin-ups, and they just go halfway up.”

“Or if they do a pull-down exercise or curls and they just sit there and do half a curl,” the Terminator actor continued. “You have to concentrate when you do everything,” he warned of bad habits.

“You’ve got to feel the bicep, you’ve got to squeeze it and do it the right way because then that rep really has an effect; otherwise it doesn’t have any effect, and therefore you’re wasting your time,” the seven-time Mr. Olympia winner advised. “It drives me nuts when I see them in the gym.”

To maximize your time at the gym, Schwarzenegger says: “Just do the exercise the right way.”

On the subject of gym instructors, Arnold noted that “a lot of them suck” and teach “wrong positions” that can lead to injuries.

The 72-year-old Schwarzenegger is still in phenomenal shape and hits the gym every day, sometimes twice a day, despite recovering from open-heart surgery that he had in March. He gave the timeless advice that when people “cheat on exercise – they cheat on themselves, they don’t cheat on anyone else.”

Arnold is currently promoting Terminator: Dark Fate, the sixth in the franchise that reunited him with actress Linda Hamilton and filmmaker James Cameron.

You can read the entire Arnold Schwarzenegger interview over at LadBible.

Below is more celebrity workout advice from Arnold.

RELATED: Arnold Schwarzenegger Made A Rap Song And It’s Really Something