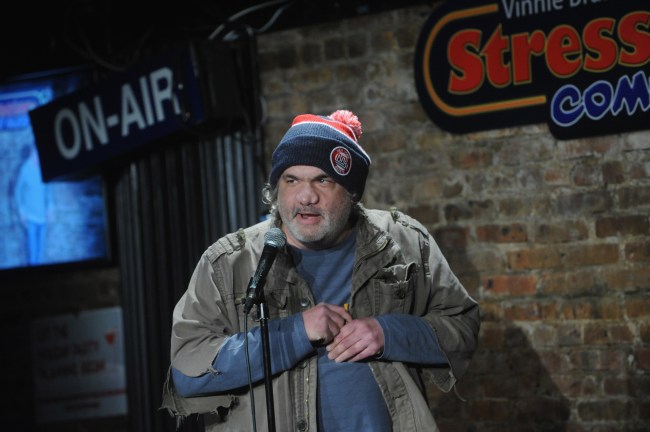 Shit! Artie Lange is evidently not ‘doing really well,’ as it had been reported last month when he was filmed fulfilling his community service duties as a garbage man in New Jersey, looking sharp and spirits high.

The 51-year-old comedian has been arrested by the Essex County Sheriff’s Office in New Jersey after being in violation of his probation while completing his drug court program, Radar reports.

“Lange is non-compliant,” officials told Radar. “Consequently, he will be taken into custody by officers from the Essex County Sheriff’s Office. He will be returned to the Essex County Correctional Facility in Newark.”

“All the stories gave the impression he was doing great, but that is not the case,” the official added.

Lange’s probation stemmed from a 2017 arrest for heroin possession, in which the court court subsequently ordered him to attend a six-month drug treatment program he was to attend in March.

On May 12, police reportedly found Lange near his Hoboken, New Jersey, home with “a clear plastic bag with heroin on his lap in his Range Rover.”

The arrest came around the time a video of Artie Lange cheerfully pumping gas (another court-ordered community service fulfillment) circulated on the internet.

In the video, which was posted on May 17, Artie claims that he’s 111 days sober after a fan gives him a $20 tip with the phrase “Not Valid For Drugs” written in Sharpie on the backside.

Artie reached out and asked us to post this for him: Pumping gas and reading Howard Sterns new book, which is great by the way. I read in 2004 Trump interview with me there. I’m reading about the POTUS when a guy yells at me “ yo fill it with regular” lol, my crazy life! pic.twitter.com/X5uMG74ONs

Lange has repeatedly declared heroin as his one regret, telling NJ.com last year that he’d rather tackle people than let them try the highly addictive drug.

“Nothing knocked me on my a** like heroin, with the physical withdrawals,” he says. “It’s the worst.”

In his 2018 memoir titled ‘Wanna Bet?‘, Lange admits that his default strategy for coping with stressful or frustrating situations in distracting himself with chaos. It’s what caused him to pop 120 Percocet a day (yes, a day) five-plus years ago. It’s what prompted him to constantly cheat on his girlfriend, once with 11 strippers. It’s what compelled him to do heroin at a Garden State Parkway rest stop while he was starring in an HBO series.

“There’s no other voice that I have,” Lange said in his book. “I really have to stop myself from listening to the bad voice. It takes willpower.”

For the love of all things holy, I hope he can ignore that bad voice.