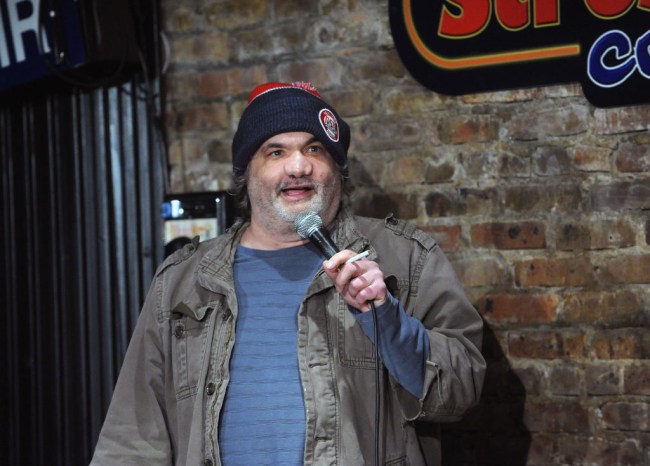 Artie Lange made a revealing proclamation on his new podcast about how CBS Radio attempted to steal the comedian from Howard Stern. CBS was so desperate to find a replacement for The Howard Stern Show that they offered Artie a ton of money.

Sabean, Artie, and Lange’s co-host Mike Bocchetti were talking about how The Howard Stern Show went from FM radio to Sirius/XM satellite radio. That’s when Artie revealed that CBS wanted him badly to host his own radio show.

Check out Artie Lange's Halfway House coming up in 2 minutes with Me, Mike Bocchetti and Tim Sabean who was the Senior VP of the Howard Stern Channels. This one was a fun one guys. Here's the link and enjoy: https://t.co/CPzylzyntp pic.twitter.com/4sDg3vHbtn

RELATED: A Sober Artie Lange Says He Feels ‘Terrible’ About Fallout With Howard Stern And Wants To Make Amends

Howard announced a year and a half before beginning on Sirius/XM, while he was still working at CBS, that he was leaving for satellite radio.

“This is one that hasn’t been discussed a lot at all,” Artie said. “Now for a year, we know we’re leaving regular radio.”

“I get a call from my manager one day, about a year before we leave for satellite,” Lange said. “They wanted me and Gary Dell’Abate — Baba Booey to leave Howard, basically to f*ck him over.” CBS Radio executives including Westwood One CEO Joel Hollander wanted “The Artie Lange Show produced by The Howard Stern Show producer Gary Dell’Abate.”

“Being a man, it’s America, I have to find out about this offer,” Lange said. “So the offer was they wanted to give me $5 million a year, for four years, which was way more than I was making on Stern. And guaranteed money by the way, it would have been $25 million if the show lasted a week.”

“Tim [Sabean] has the awful job of bringing that offer to me,” Artie said. “So I get this offer to f*ck over Howard.”

“I don’t give a f*ck about the money, I made a lot of money, Howard let me do whatever I wanted. I loved Howard,” Lange said on his podcast. “If Howard was giving me a buck a year, I wouldn’t do that to him.”

In 2006, CBS Radio replaced David Lee Roth from Van Halen and paid him $8 million, according to Lange. The David Lee Roth Show lasted four months, and ended with Roth suing CBS. Roth was immediately replaced by The Opie and Anthony Show.

In the end, Lange, Dell’Abate, and Sabean all went to Sirius/XM to work on The Howard Stern Show. Artie having his own show where he was paid $5 million a year probably would not have ended well with the stress and even more money to fuel his insatiable drug and gambling addictions.