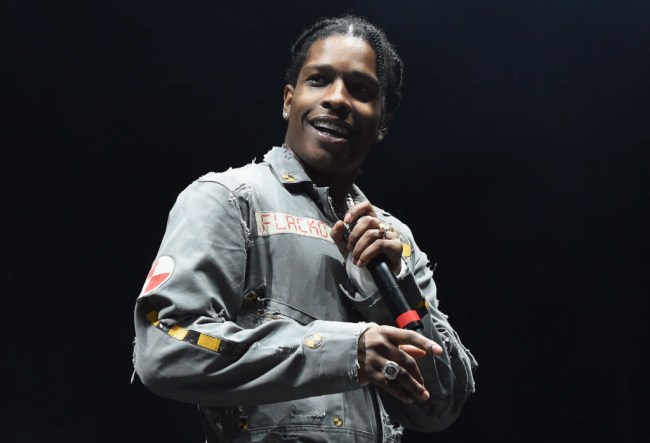 Last month, A$AP Rocky discovered himself in a bit of a sticky situation after he found himself arrested in Sweden on charges of aggravated assault after a video surfaced that showed him and his entourage beating the crap out of a guy on the streets of Stockholm.

After the footage emerged, the rapper posted a video of his own to defend himself, saying the man in question (as well as another person) had been harassing women and following him and his crew around before things went to shit.

However, his self-defense argument wasn’t enough to convince Swedish authorities to let him walk and he soon found himself sitting in jail, where he reportedly faced “inhumane conditions” despite the fact that Swedish detention centers are basically a country club compared to their counterparts in the United States.

As is the case with virtually every rapper who finds themselves in jail, the hip-hop community immediately rallied around him to create the #FreeFlacko movement and Donald Trump even claimed he was getting involved in the case despite evidence to the contrary.

Now, it appears the people’s wishes have finally come to fruition according to a reporter who was covering his ongoing trial, as the judge in the case as announced the flagship member of the A$AP crew can be released under his own recognizance as he and others involved in the case await sentencing in a couple of weeks.

#ASAPRocky judge says verdict will be announced on 14 August 2019. The suspects DO NOT need to remain in custody until then

Savage also reports the artist is free to leave the country if he so chooses but it’s unclear if he’ll depart before the sentencing (he faces up to two years in jail but requested his punishment be limited to community service and experts seem to agree he won’t face any serious repercussions).

#ASAPRocky’s lawyer has just told me the suspects do not need to remain in Sweden while they await the verdict. https://t.co/1riuiyNhOt

We don’t know for sure if #ASAPRocky will choose to leave Sweden, but he has the right to. He mentioned in court today that there were some Swedish artists he would like to meet. https://t.co/zSsypFoXat