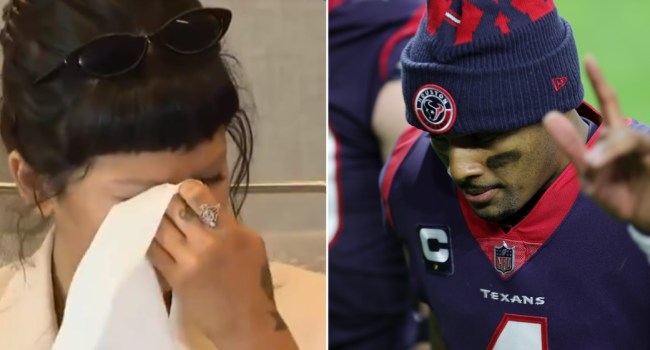 Three weeks after the first sexual assault lawsuit was filed against Houston Texans QB Deshaun Watson, the first plaintiff who came forward to sue Watson has identified herself and spoken to the media.

The first woman to file a lawsuit against Deshaun Watson (seated to Tony Buzbee’s left) has identified herself.

“My name is Ashley Solis. Remember that name. … I was afraid. I’m not afraid anymore.” pic.twitter.com/gWqX6spFmv

On Tuesday afternoon, at a press conference set up by Texas attorney Tony Buzbee, Ashley Solis made a statement about the sexual assault she suffered during a massage therapy session with Watson. The massage therapist said Watson sexually assaulted and harassed her in her home on March 30, 2020. According to the lawsuit, Watson repeatedly asked Solis to work on his groin area when he proceeded to expose himself and “purposely” touched her with his penis.

Solis revealed that she currently cannot practice massage therapy because she is suffering from panic attacks, anxiety, and depression after the assault.

Deshaun Watson accuser Ashley Solis "I can no longer practice the profession I love the most without shaking…I hope he knew how heartbreaking that is to me" pic.twitter.com/7fl1KKgB16

I can no longer practice the profession I love the most without my hands shaking during the session,” “I got into massage therapy to heal people. To heal their minds and bodies. To bring peace to their souls. Deshaun Watson has robbed me of that.”

She went on to say that she was deceived by Watson who she thought was a “good guy” prior to the assault.

Ashley Solis "My father, who was once a diehard Texans fan, can no longer mention his name without turning red…we were all deceived into thinking Deshaun Watson was a good guy and unfortunately we know that good guys can do terrible things" pic.twitter.com/LLuCoJ7aqQ

Solis concluded her statement by saying she was not doing this for the money but to stop Watson from assaulting other women.

“People say that I’m doing this just for money,” she added. “That is false. I come forward now so that Deshaun Watson does not assault another woman.”

According to Buzbee Solis had spoken with the Houston Police Department during their recently opened criminal investigation against Watson.

As of now, 22 women have come forward to accuse Watson of sexual assault.